Nearly half of schools rebuilt 4 years after temblor struck; Catholic charity has paid for 20 but needs more funds 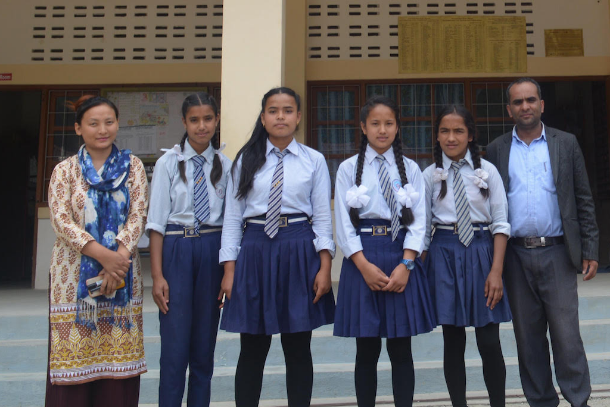 Sushmita Tamang, third from left, stands defiantly in front of her rebuilt school courtesy of Caritas Switzerland and Helvetas on April 22. The young Nepalese student was just 10 years old when a 7.8-magnitude quake tore through the country on April 25, 2015. She survived but 8,000 others perished. (Photo by Pragati Shahi)

Three earthquakes rocked Nepal on April 24, a day before the Himalayan mountain nation marked the fourth anniversary of a catastrophic quake that claimed over 8,000 lives and injured more than 20,000 in 2015.

The temblors struck in quick succession around dawn as Mother Nature sent a timely reminder that this isolated country, sandwiched between emerging superpowers China and India, will perhaps always be at its mercy.

The first was felt in Kathmandu at 6.14 a.m. (local time), measuring 4.8 on the Richter scale. It was followed 15 minutes later by a 5.2-magnitude quake in Naubise, 15 kilometers to the west of the capital. The third hit the same village 11 minutes later, but had weakened to 4.3.

For many villagers and residents, it felt as through the specter of that devastating temblor on April 25, 2015, had come back to haunt them and wreak even more havoc on their fragile communities.

"It was heartbreaking to see our houses collapse in front of our eyes. People were wailing and shouting in fear. Some villagers were trapped under their crumbling homes while others were scrambling to get out," recalls 14-year-old Sushmita Tamang.

She had just finished her lunch and was washing dishes outside her home when the historic 7.8-magnitude quake hit her remote hillside village of Duwachaur in Sindupalchok district four years ago.

"Luckily, no one was inside my house when it hit," she said. Sharmila Tamang, 16, receives supplies from a representative of Caritas Switzerland on April 22, 2018, at Terse Higher Secondary School in Sindupalchok, one of the worst-hit districts of Nepal during the April 25, 2015 quake. (ucanews.com photo)

Within seconds, her shoddily-built home made of mud and tin had literally disintegrated.

Sushmita's mother was working as a housemaid in Dubai at a time and her father was in Kathmandu, meaning she had to fend for herself and take care of her little sister. Sushmita was just 10 at the time. 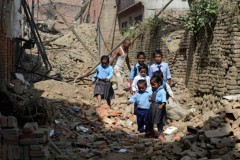 Hope for children after Nepal earthquakes Sindupalchok was one of the worst hit districts in the country, suffering over 3,000 human casualties and colossal structural damage.

"I thought the ground was going to crack apart and we would fall inside," Sushmita told ucanews.com.

"Houses everywhere were being buried under piles of rubble. Our school, a few hundred meters away, was flattened."

Sushmita and hundreds of thousands like her living in rural villages were dealt a double blow — losing both their homes and their schools.

"I was a sixth grader and classes had just begun," she recalled.

"I remember feeling happy to be back in school with my friends and full of energy. But on the day of the quake we weren't in class, which was lucky because I saw our classroom — where we had been studying the day before — totally destroyed." Shree Terse Higher Secondary School was one of the first 10 schools rebuilt by Caritas in partnership with Helvetas. It now has 14 rooms, more modern facilities, and is quake-resistant. (Photo by Pragati Shahi)

Not all of the 600 students who attended Shree Terse Higher Secondary School were so lucky: three perished and more were injured.

Krishna Dhungana, the school's principal, said classes resumed a month later at so-called Temporary Learning Centers (TLCs). But it wasn't until last year that the school was fully rebuilt and operational.

"We held classes inside the TLCs for three years. It was a difficult time for students and teachers," Dhungana said.

"In the summer, it was too hot inside, and in the winter, it was unbearably cold. The situation got worse on rainy days, when water would seep inside, or the wind blew away the zinc sheets used as roofing."

Shree Terse was one of the first 10 public schools to be rebuilt in Sindupalchok district thanks to the support of Caritas Switzerland, the Catholic Church's charity arm, in partnership with Helvetas, an independent Swiss development agency.

The new building is earthquake-resistant and has 18 rooms, as well as basic amenities like potable water. It was officially handed over on Nov. 4, 2018.

The Vatican also stepped in to help, with Pope Francis donating US$100,000 for Nepal quake assistance.

Meanwhile, Indian Catholics also played an important role in keeping survivors' heads above water by raising funds to build hundreds of temporary shelters for them on the outskirts of the capital.

With Helvetas' help, 200 temporary school buildings were set up so that 6,500 students could resume their studies.

"Caritas Switzerland has worked in many disaster-hit countries in Asia. In Nepal, we wanted to focus on rebuilding schools as we felt this was one thing we can do really well," said Bernd Schafer, Caritas' country director for Nepal. Private houses are shown being rebuilt in Dolakha District, where many schools that were destroyed in 2015 are now just piles of rubble. (ucanews.com photo)

After teaming up with Helvetas, Caritas began working on quake-resistant schools in the district, 20 of which have now been completed to service nearly 3,000 students.

"For us, it wasn't just the structure of the schools that mattered. We also wanted the new buildings to provide a better learning environment with more facilities for all students in each classroom," Schafer said.

Shree Terse now has an incinerator for waste disposal and separate toilets for boys and girls — a luxury the students were previously denied.

However, thousands of students still study at temporary shelters because of delays in reconstructing their damaged schools due to a lack of funding.

Four years after the disaster, only 45 percent (4,476) of the 7,553 damaged or destroyed schools have been rebuilt.

Local authorities have reportedly asked the government for 27 billion rupees (US$386,000) to complete the school reconstruction work.

Sushmita moved to her new home last month after her family received 300,000 rupees ($3,000) in government aid. Now a 9th grader, she described it as a godsend after spending nearly four years living in a temporary shelter.

"It feels good to know both my home and my school, where I spend most of my time, are safe," she said.

"Now I can focus on my studies without looking out the window all the time worrying if the earth is going to start shaking."