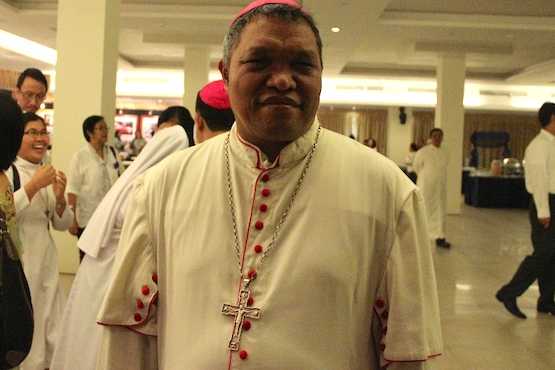 Rebel priests in Indonesia's Ruteng Diocese have appealed to the Vatican to intervene and resolve a bitter dispute with their bishop, whom they accuse of misappropriating more than US$100,000 in church funds.

Representatives of the priests, accompanied by a bishops' conference official met Archbishop Antonio Guido Filipazzi, the outgoing apostolic nuncio in Indonesia on June 16 to call on the Vatican to help them achieve their demand that Bishop Hubertus Leteng heed their calls for a complete overhaul of how the diocese is run.

The move comes after dozens of priests in the diocese on Catholic-majority Flores Island quit their posts in protest against their bishop.

Father Alfonsius Segar, one of the priests who met the nuncio, told ucanews.com that Archbishop Filipazzi has promised to help resolve the dispute.

"He will immediately take this issue up with the Vatican," Father Segar said.

Father Segar also said the nuncio will send someone to the diocese to appraise the situation.

"We are looking forward to a swift Vatican decision on this," Father Segar said.

A source close to Antonius Agus Sriyono, Indonesia’s Ambassador at the Vatican told ucanews.com that the Indonesian government was also raising the Ruteng dispute with the Vatican.

That source said the ambassador is trying to collect evidence related to allegations against Bishop Leteng and would summon witnesses to the Vatican if necessary.

On June 12, 69 priests in Ruteng Diocese declared open revolt by quitting their posts as episcopal vicars and parish priests, and demanded Bishop Leteng completely change how the diocese is run.

Last year, Bishop Leteng was accused of secretly borrowing US$94,000 from the Indonesian Bishops' Conference in Jakarta and US$30,000 from the diocese but failed to provide an accountability report.

In a meeting, he told priests the money was used to finance the education of a youth from a poor family who was studying to be a pilot in the United States.

When the priests asked for details, the bishop told them that it was none of their business, the source said

However, the priests suspect the money went to a woman who they allege the bishop was having an affair with. The alleged affair surfaced in 2014 after a priest who chose to leave the priesthood went public with the allegation.