Among the 10 members of the Association of Southeast Asian Nations, only Singapore has announced sanctions against Russia 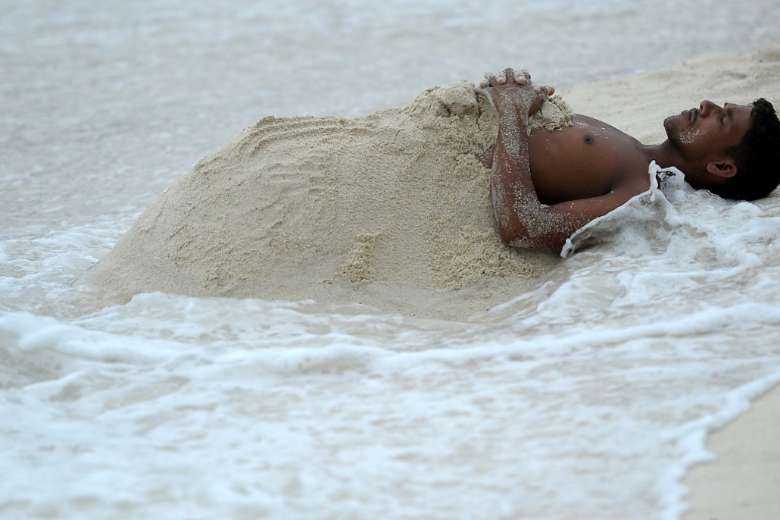 A Maldivian boy rests on the edge of the ocean at Male beach on Male, capital of the Maldives. The tiny Indian Ocean atoll nation has become a haven for Russian oligarchs. (Photo: AFP)

Asia is deeply embroiled in the Ukraine crisis with a shortage of wheat, cooking oil and batteries for electric vehicles, with skyrocketing oil prices adding salt to its wound.

Asian nations are putting their interests first when reacting to the Russia's invasion of Ukraine even if it means dumping vital allies or giving up on long-held policies.

Former prime minister Shinzo Abe has hinted at Japan hosting US nuclear weapons despite the East Asian nation having a pacifist constitution.

India sided with Russia and refused to toe the Washington diktat on dumping Russia, its long-time security partner. Despite being a vital member of the four-nation QUAD, also known as the Asian NATO, India abstained from a crucial UN vote that urged Russia to pull back its invading army from its East European neighbor.

China also followed suit at the UN but Beijing had its own economic priorities to rally behind the Russian economy, which was axed from the dollar-based SWIFT payment system in response to the Ukraine invasion.

Western sanctions and removal from the international banking system have frozen nearly US$1 trillion worth of Russian assets. China has come to the aid of Russia with its own Cross-border Interbank Payment System (CIPS). It is manned by the People's Bank of China to internationalize yuan use.

The Maldives was one of the 141 countries that backed the UN General Assembly resolution condemning the Russian invasion. But the Indian Ocean island nation’s pro-Western leanings did not prevent it from welcoming luxury yachts from Russian oligarchs now under the purview of Western sanctions.

Russian nickel tycoon Vladimir Potanin’s yacht Nirvana is among them. His Norilsk Nickel company, also known as Nornickel, is the world’s largest nickel producer with its production facilities located in Siberia in Russia. The Maldives does not have an extradition agreement with the US, which means the assets of Russian oligarchs are safe in the archipelago unless the individual is wanted for a criminal investigation.

The paradise beaches of the Maldives have always beckoned Russians. However, with the invasion of Ukraine on Feb. 24, few Russians have set foot on the archipelago. Russians account for 15.5 percent of arrivals in the Maldives, while Ukraine is in eighth place with 2.3 percent.

At the time of the Russian invasion, there were 8,000 Russians and 750 Ukrainians in the country. In one month, the Maldives must have lost at least $200 million, mainly from tourism-related reservations.

It was realpolitik that shaped Sri Lanka’s neutrality in the Ukraine crisis. Russia is one of the top importers of Sri Lanka tea, which generated revenues of $142 million in 2020. As the island nation is facing a severe foreign exchange crisis, the outflows and inflows of each dollar matter to the country. Both Russia and Ukraine are important sources of forex generation for Sri Lanka.

Bangladesh has embraced unofficial neutrality because it depends on Russia for its energy security and to graduate from its least developed country status.

Taiwan, a self-ruling democracy claimed by China, has gone pro-Western and is a party to the international campaign to isolate Russia from the global banking system and SWIFT.

Among the 10 members of the Association of Southeast Asian Nations (ASEAN), which Cambodia currently chairs, only Singapore has announced its own sanctions against Russia. Cambodian Prime Minister Hun Sen on March 28 condemned Russia's invasion of Ukraine.

All is not well with the 194-kilometer border between Japan and Russia. Tokyo has hardened its position on the Northern Territories and regards them as Japan’s inherent territories

Indonesia, which holds the G20 presidency this year, has remained neutral. Vietnam joined 34 others in abstaining from a recent UN vote denouncing Russia.

For South Korea, the impacts of the Ukrainian crisis are worrying as wheat and corn imports from Ukraine alone make up more than 10 percent of Asia’s fourth-largest economy. As imports from Russia and Ukraine are difficult to come by due to the blockade of ports on the Black Sea, the local food and feed sectors are hit hard and grain prices have become expensive in South Korea, a top 10 global economy.

The Ministry of Agriculture, Food and Rural Affairs is chalking out countermeasures to tide over the Ukraine conflict as South Korea is highly dependent on Russia for its energy needs, including crude oil, and imports metals from Ukraine. Hyundai has already closed its St. Petersburg plant in Russia because of rising raw material costs.

The Fumio Kishida government launched a subsidy program for the oil industry in January.  Automobile production in Japan is affected due to a shortage of palladium used for making exhaust gas less harmful. Japan meets 35 percent of its domestic demand by importing palladium from Russia.

Moreover, all is not well with the 194-kilometer border between Japan and Russia. Tokyo has hardened its position on the Northern Territories, which Russia seized at the end of World War II, and regards them as Japan’s inherent territories.

Asia reported the largest share of EV sales worldwide last year. Along with Japan and China, South Korea has a strong position in terms of market size and production

Russia is a major producer of primary nickel products. Norilsk Nickel is among the limited number of firms authorized to sell a specialized form of nickel on the London Metal Exchange .

Nickel is popular in the production of electric vehicle (EV) batteries as it allows drivers to travel farther on a single charge. The batteries that Tesla, the world’s biggest EV maker, is using for its Model 3 vehicles are nickel-cobalt-aluminum oxide, which contains 80 percent nickel by weight and 10-11 percent lithium.

EV battery costs have increased at a time when global sales of EVs rose 106.8 percent last year, accounting for close to 9 percent of total sales. Asia reported the largest share of EV sales worldwide last year. Along with Japan and China, South Korea has a strong position in terms of market size and production.

Asia is betting big on EVs and their adoption is a crucial part of the strategy of many Asian governments to go green. Thailand, the region’s fourth-largest auto assembly and export hub catering to companies like Toyota and Honda, is planning to churn out 725,000 EV units a year, or 30 percent of its total vehicle production, by 2030. With the shortage of nickel and other raw materials, progress will be tardy.

After Ukraine, Russia is the next biggest exporter of sunflower oil, with Asia a huge market. India imports 175,000 to 200,000 tonnes of sunflower oil per month from them. Shipments of cooking oil to India have been held up at various ports.

In Indonesia, the shortage turned fatal and claimed the lives of two people queuing to buy cooking oil in East Kalimantan on the island of Borneo. To address the shortage, Indonesia has asked exporters to set aside 30 percent of palm oil products for domestic use, up from 20 percent.

Though Asian nations are looking for alternatives such as linseed oil, rapeseed oil or palm oil to meet the crisis, the transition is not easy as food labeling cannot be changed at short notice.