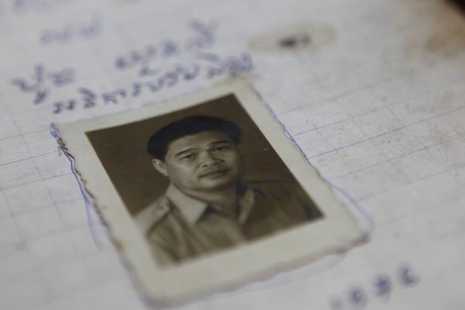 By Todd Pitman for Japan Times/AP

It was an extraordinary act of defiance, and it was extraordinarily risky. But all he did was take out a pen and write.

Nearly 40 years ago, hunched on the floor of the wood-and-leaf hut he was forced to live in away from his children, Cambodian school inspector Poch Younly kept a secret diary vividly recounting the horrors of life under the Khmer Rouge, the radical communist regime whose extreme experiment in social engineering took the lives of 1.7 million Cambodians from overwork, medical neglect, starvation and execution.

Acutely aware that he could be killed if discovered, Younly hid the diary inside a clay vase. In those dark days, when religion and schools were banned and anyone deemed educated was a threat, he had no right to own so much as a pen and paper.

“Why is it that I have to die here like a cat or a dog . . . without any reason, without any meaning?” he wrote in the spiral-bound notebook’s last pages.

Younly did not survive that era. But his diary did. It was part of the vast case file that last week helped convict the only two surviving Khmer Rouge leaders still facing justice: 83-year-old former President Khieu Samphan and 88-year-old Nuon Chea, the right-hand man of the group’s infamous late leader, Pol Pot. On Thursday, a U.N.-backed tribunal sentenced both men to life in prison for crimes against humanity — a verdict that many believe was too little, and far too late.

Made public for the first time last year, the diary is astonishingly rare — one of just four known firsthand accounts penned by victims and survivors while the Khmer Rouge were in power, compared to 453 such documents written by communist cadres at the time.

It is “the story of all of us who survived,” said Youk Chhang, who runs the Documentation Center of Cambodia, which has amassed millions of documents, photographs, films and verbal testimonies from the Khmer Rouge era. When the Khmer Rouge were in charge, everything belonged to the revolution, he said. “You owned nothing — not even your life story.”

Younly’s account is vital because people like Khieu Samphan and Nuon Chea have tried to cast doubt over atrocities committed during their rule. The majority of Cambodians living today were born after the Khmer Rouge were ousted in 1979, and even those who survived can forget how bad it was.

“People forget how hungry we were,” said Youk Chhang, who still has dark scars on his legs from shackles he was held in by Khmer Rouge soldiers for two months. “It’s hard to describe to young people what starvation felt like. But the whole nation was starved . . . and this story is rarely told.”

Written in Khmer, the diary fills about 100 pages and is divided into two sections. The first summarizes Younly’s family history, an era spanning French colonial rule, the Japanese occupation during World War II and his arranged marriage to a 15-year-old. The rest, written as a letter addressed to his children, describes life under the Khmer Rouge and is dated only at the start and the end — Feb. 9 and July 29, 1976, with a final postscript entered a few days later.

When Khmer Rouge forces seized Phnom Penh on April 17, 1975, the couple were living with eight of their children in a rural town called Kampong Chhnang. Three days later, the guerrillas arrived there and residents — including Younly — cheered, relieved that the war was finally over, recalls his widow, Som Seng Eath, 86.

But within hours, everything changed. Every soul was ordered to leave on foot.

The Khmer Rouge were emptying Cambodia’s cities, marching millions of people into the countryside to work as manual laborers. Their aim was to create an agrarian communist utopia, but they were turning the Southeast Asian nation into a slave state.

Younly “didn’t believe what was happening. He kept saying, ‘Don’t worry, we’ll be back soon, don’t pack much,’ ” his widow said. She ignored his advice and took as much as she could — including five of her husband’s school notebooks and several blue ink pens.

As gunshots rang, the family joined the departing hordes, cradling their young children and whatever they could carry. As they walked into the night, people wept.

Younly recounts marching through forests and mountains for nearly two weeks. Along the way, most of their possessions were confiscated, including four of the notebooks and a prized camera Younly had bought during a government visit to inspect schools in the United States in 1961.

Ominously, they began hearing talk of execution sites ahead — what would later become known as Cambodia’s “killing fields.”