Missionaries of Jesus sisters take up the case of two girls found dead after allegedly being raped. 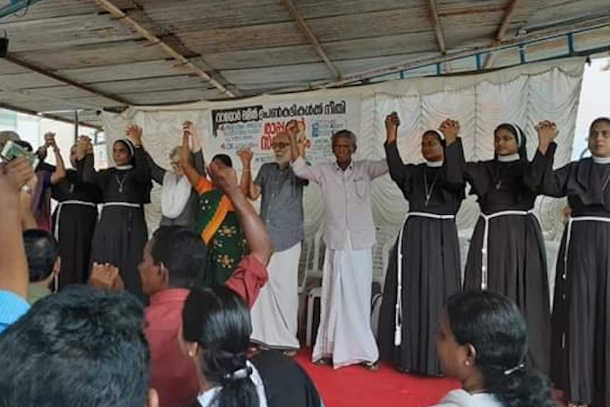 Five Catholic nuns in Kerala, who hit the headlines with their fight against rape, have joined another campaign demanding justice for two minor girls who were allegedly raped and murdered. (Photo supplied)

Five Catholic nuns in Kerala, who hit the headlines with their fight against rape, have joined another campaign demanding justice for two minor girls who were allegedly raped and murdered.

The nuns of Missionaries of Jesus joined a public protest on Nov. 18 in Kerala’s commercial capital Kochi.

It was part of an ongoing campaign in the southern Indian state that started last month after a district court acquitted all four people accused in the case.

The girls from a socially poor Dalit family, aged 13 and nine, were allegedly attacked in 2017 inside their one-room house when their mother was away at work.

“We attend the protest to share our solidarity with the grieving mother of the two minor girls,” said Sister Anupama Kelamangalathuveli, who spoke for the other nuns.

The protest of the five nuns in September 2018 demanded the arrest of Bishop Franco Mulakkal of Jalandhar, who was accused of raping their former superior. Their diocesan congregation functioned under the bishop’s patronage. The bishop was arrested and faces trial in court.

“We understand the pain of their mother, and we want justice for her even though her daughters would not come back to life,” the nun told ucanews on Nov. 19.

The 13-year-old girl was found hanging inside her home on Jan. 13, 2017, and her nine-year-old younger sister told the police that she had seen two masked men leaving the house that day.

On March 4, some 50 days later, the younger one was also found hanging dead. The investigation said both were sexually abused. Their mother claims the children were murdered to hide the crime.

Following public outrage, police arrested five people including a juvenile on charges of rape, sexual assault and abetment of suicide, but not for murder.

A district court last month set all four free of all charges, saying the state’s prosecution had failed to prove the charges.

Protests continue across Kerala demanding a reinvestigation and retrial of the case, with some accusing state systems of mishandling the case to save the accused, who are connected with the ruling Communist Party.

The protest in Kochi was organized by rights activists and civil society groups, who were also supportive of the nuns’ protest more than a year ago.

Besides Sister Anupama, four other nuns — Josephine Villoonnickal, Ancitta Urumbil, Neena Rose and Alphy Pallasseril — attended the protest in their nuns' habits and returned to the convent in the evening.

“We want justice for the mother of the two innocent children,” said Sister Josephine.

“At times, there will not be any evidence at all to prove the truth. And sometimes the accused will come with evidence to prove their point, but it will not have an iota of truth. That is what happened in this case,” said the nun.

She said women and girls in Kerala increasingly feel insecure because social systems are reluctant to condemn sexual violations against women. “This should change. Women should feel safe to move around,” the nun said.

Sister Josephine said the case of two young girls has “shaken the consciousness of Kerala society. The tragedy is unperceivable ... it happened inside their house, which they considered the safest place.”

Writer Sarah Joseph alleged that the police had “consciously conspired for the acquittal of the accused” despite having “serious shreds of evidence.”

She said the police did not record the evidence for the court because the accused were associated with the Communist Party of India (Marxist) that heads the state government that came to power in 2016.