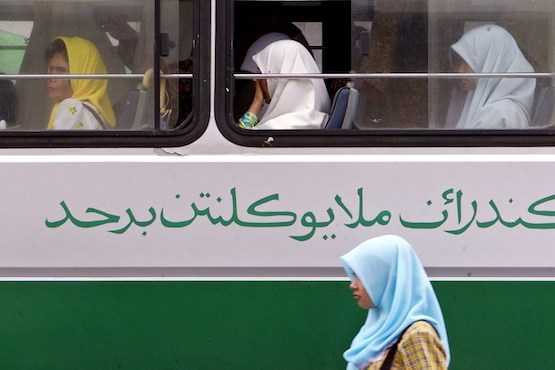 Women in a bus waiting to depart to their village outside of Kota Baru, in Malaysia's eastern Kelantan state in this file image. A lawmaker in Malaysia, who is also a former Islamic judge, has sparked outrage after saying there are benefits for a rape victim who marries her rapist. (Photo by Jimin Lai/AFP)

Shabudin Yahaya, a Malaysian lawmaker and former Islamic judge, recently caused consternation when he advocated in parliament that the crime of rape could be remedied by the rapist marrying his victim.

"Maybe with the marriage, [the man] could lead a different life that is better. And the wife who was raped, if she can get married, will not go through an uncertain future. At least she has a husband ... this is a remedy to social problems," said Shabudin.

He was speaking during the debate on an amendment to Sexual Offences Against Children Bill that the Malaysian government tabled after the jailing for life of a British man for sexually abusing children in Malaysia.

Richard Huckle admitted 71 counts of abuse against at least 23 children over a nine-year period. Police believe he abused up to 200, the BBC reported.

Shabudin said his statement was taken out of context. However, his views reveal a conservative, patriarchal society that is struggling to adapt to a changing world.

The Penan, a nomadic indigenous people living in Sarawak and Brunei who are mainly hunters and gatherers, have been exploited — in varying different ways — by almost all of who have encountered them over the past several decades.

One Penan teenager told how she was dragged from her room, beaten unconscious and raped, after she had hitched a ride to school on a logging truck.

Sarawak Land Minister James Masing when asked to comment told the BBC: "I think this is where we get confused. I think ... the Penan are a most interesting group of people and they operate on different social etiquette … [and] a lot of this sex is consensual. They change their stories when they feel like it. That's why I say Penan are very good storytellers."

A federal government task force confirmed in a report in September 2009 that girls as young as 10 had been raped by loggers and some had borne children as a result of rape. A female member of a nomadic Penan tribe carries her child and pet monkey near her village Long Nen in Malaysia's Sarawak State in this file image taken on August 20, 2009. (Photo by Saeed Khan/AFP)

In 2012, a tenpin bowler, Noor Afizal Azizan, was acquitted of statutory rape, because he had "a bright future as a sportsman." Was the girl's future not important? Was she no more than a plaything?

In theory, such crimes cannot go unpunished. The legal minimum age for marriage under civil law for both genders is 18. However, girls can marry at 16 with permission of their state's chief minister, while Islamic law sets a 16-year minimum age for girls and permits even earlier marriages with the permission of a Shariah court.

There is limited data about child marriage in Malaysia. A United Nations report in 2010 showed that over 82,000 married women in the country were girls between the ages of 15 and 19 and nearly 15,000 girls below the age of 15 were in a marriage.

According to Malaysian Shariah Judiciary Department figures there were 10,240 child marriage applications between 2005 and 2015.

In 2013, a 40-year-old restaurant manager raped a 12-year-old girl. He married the girl as his second wife after being charged. In 2016, a 28-year-old was charged with rape of a 14-year-old girl. He subsequently married the teenager and was discharged by the court. The High Court intervened and that case will go to trial later this year.

Shabudin is a former Shariah court judge and his speech only highlights the troubling views some Muslim conservatives have on sexual crimes. He is now a government backbencher.

Who will speak for the women and children of Malaysia if not their elected leaders, including one with legal wisdom and training in Islamic law?

Women, Family and Community Development Minister Rohani Abdul Karim while making her position on rape clear, was typically deferential to Shabudin because he was a Shariah judge.

It forces Malaysians to ask who will be the guardians of the women and children of Malaysia if not their elected leaders? Who will be prepared to demand justice and stand up for their rights?

Are their leaders unaware that children are psychologically, physiologically and emotionally ill-equipped to become parents. A child rape victim has no skills, no education, nor any means of supporting herself.

Sexual violence against children is caustic and their attitude, which ignores the rule of law and protection of the weak, damages the nation. Acceptance of child marriage is a symptom of a social ailment.

The sponsors of the child protection bill have a lot more work to do if those elected to high office have not understood that child marriage cannot be a cover for rape and such views have no place in a modern, progressive society.