Muslims feel blessed to observe holy month without persecution but fret about lack of money, food in Bangladeshi camps 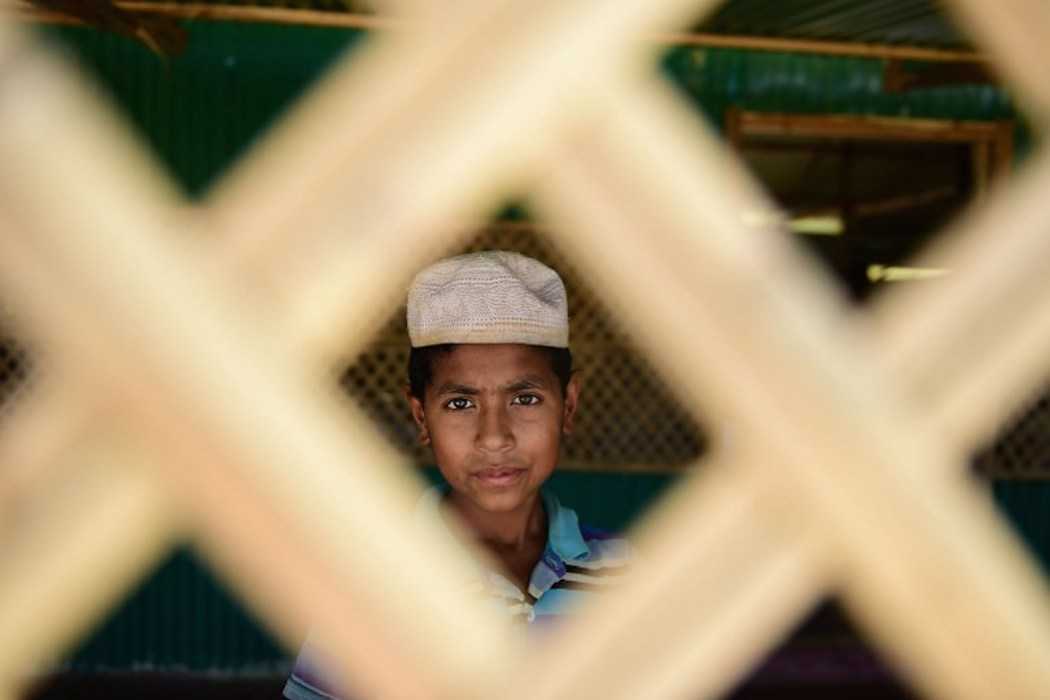 A Rohingya youth looks out from a mosque as he attends afternoon prayers at a refugee camp in Ukhia, Cox's Bazar, Bangladesh, on May 10. (Photo by Munir Uz Zaman/AFP)

Hamid Hossen can barely recall the last time he celebrated Ramadan properly in Myanmar. It was about six years ago before ethnic violence rocked Rakhine State in the west of the country.

"After that it became really difficult. I often had no other option than to pray at home," said the 52-year-old Rohingya Muslim, who worked as a farmer before fleeing the country along with hundreds of thousands of his compatriots.

Now he is a refugee in Cox’s Bazar, a border district in Bangladesh. Here he and other Rohingya who left Myanmar to escape what the UN High Commissioner for Human Rights has described as a "textbook example of ethnic cleansing" can celebrate the holy month of Ramadan without any restrictions.

There is a mosque near Hossen's shelter and no military to curb the Rohingya from celebrating this religious festival, which sees them fast and pray from dawn till dusk while also studying the Quran and devoting time to introspection.

This year the holiday began on May 16 with a sighting of the full moon and will end on June 14.

"Now that it’s Ramadan we eat twice a day, at 6.30pm and 3am. We also go to the mosque to pray five times daily," Hossen said from the camp where he shares a basic shelter with his family. This is the first time in six years that Rohingya Muslims like Hamid Hossen have been able to enjoy Ramadan without fear of reprisals from security or other forces in Myanmar. Here he is pictured at a refugee camp in Cox's Bazar in early June 2018. (Photo by ucanews.com)

His neighbor Jafor Alam agrees. Most of the Rohingya refugees in the camp can now celebrate Ramadan the way it is supposed to be celebrated, he said.

"It feels good to do that. Here we can pray. In Myanmar they won’t even allow you to do that."

But celebrating Ramadan in the overcrowded refugee camps of Cox’s Bazar, where up to 900,000 people have been given temporary shelter, is far from easy.

The refugees complain there is not enough food available for the evening and early morning meals, making it hard to fast during the daytime. Added to this are problems related to the soaring heat.

"When it’s hot like this, it is difficult to fast," said Mohammad Shakur, imam of the Mosjide Osman Mosque at the Kutupalong refugee camp.

"There’s no electricity in the camp so it’s not possible to turn on a fan, and you are not allowed to drink something cool because that would mean you have interrupted your fast."

Yet none of these challenges have deterred the refugees from observing Ramadan, he said.

"Everybody is fasting, young and old, and by doing that we will receive mercy from Allah. During this month he will appreciate our prayers even more than during the rest of the year." Rohingya Muslims at the camps enjoy freedom of religion whereas back in Myanmar any assembly of five people of more can get them arrested. (Photo by Munir Uz Zaman/AFP)

In Myanmar, things are very different.

There the Rohingya are "trapped in a vicious system of state-sponsored, institutionalized discrimination that amounts to apartheid," Amnesty International wrote in an analysis last November.

They have been systematically discriminated against for decades based on their ethnicity and faith. Many mosques in Rakhine State, where most of the Rohingya live, have either been destroyed or shut down with their settlements razed and military outposts reportedly built on top of the sites.

Since the ethnic violence broke out in June 2012, which saw dozens killed, freedom of movement and access to mosques has been a growing problem, said Phil Robertson, deputy director of the Asia division of Human Rights Watch (HRW).

"The police cordon to keep people away from the seriously damaged shells of Sittwe’s main mosques, where thousands prayed daily for decades, is emblematic of what Rakhine State’s Muslims have lost," he said.

"Add to this the prohibitions on building new mosques, or even doing necessary repairs without prior permission of the state, and it becomes clear that Myanmar is engaged in a war of attrition against the Muslim faith," he added.

Imam Mohammad Shakur, who fled Rakhine last September, remembers that in his village the Rohingya were not allowed to meet with more than five people at one time, as this could be considered a political or religious gathering.

"That made it really difficult to celebrate Ramadan with your community because if you were more than five people the police would come to arrest you," he said. A lack of electricity coupled with the soaring heat can make life at the camps hard to bear, says Mohammad Shakur, imam of the Mosjide Osman Mosque at the Kutupalong refugee camp in Bangladesh. (ucanews.com photo)

They were often forbidden from praying, especially at night, he recalled.

"It’s very strange, isn’t it? If you want to organize a dance party in Rakhine you don’t need to seek permission, but you do need permission if you want to pray."

"Friday afternoon prayers were a particularly sensitive subject," he said.

Even though most of the Rohingya Muslims have found a safe haven in Bangladesh, life is still hard for those who remain in the northern part of Rakhine State, according to Kyaw Win, executive director of the Burma Human Rights Network.

"They have to be really careful when going to the mosque. They now have to pray at home," he said.

Religious life is easier for Hamid Hossen and Jafor Alam, who can stroll to their mosque whenever they please as it lies just a 5-minute walk away.

But they have more pressing concerns, they say, with barely any income and not enough food to feed their families.

"In Myanmar we had a good life," said Hossen. "I was growing vegetables and could always provide my family with what they need. Here we don’t eat as much."

All over the camps people say they don't receive enough food. Aid organizations are working hard to improve the situation but they, too, face a tough situation.

In the space of just nine months this has grown into one of the biggest humanitarian and refugee crises in the world, and many organizations are struggling from a lack of funding.

"The international community really needs to redouble their efforts to provide the necessary food, services and other assistance," said Phil Robertson of HRW, adding no one expects this problem to be settled quickly despite Bangladesh and Myanmar having signed a repatriation deal.

Back the camp, the mosque is calling for afternoon prayer and Hossen rises from his chair to respond to the call. In less than two weeks’ time he hopes to celebrate Eid al-Fitr, the end of Ramadan, with his family and friends. Even though he does not have any means of income at present, he still hopes to buy some nice food and new clothes for his children so they can celebrate the end of the holy month in a fitting way.

"We are safe here and we are happy that we can now pray without restriction," he said. "But we would be even happier if we could go back home and profess our faith there without fear [of reprisals from the military and other groups in Buddhist-majority Myanmar]."