Military to continue crackdown against separatist forces in conflict-torn areas 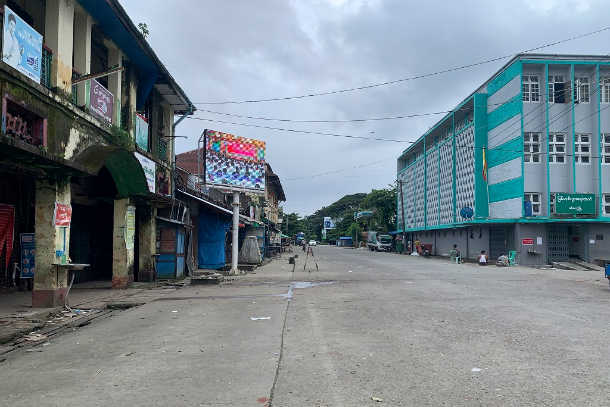 The main street of Sittwe, capital of Rakhine state in southern Myanmar, remains deserted on Aug. 23 during a lockdown to stem the spread of the coronavirus. (Photo: AFP)

Myanmar’s military has extended its unilateral ceasefire to Sept. 30 to allow the conflict-torn nation to fight Covid-19 but areas where the Arakan Army operates remain excluded.

The military, known as the Tatmadaw, proclaimed a nearly four-month truce from May 10 to Aug. 31 with the aim of effectively and rapidly carrying out the containment, prevention and treatment of Covid-19 and restoring eternal peace.

“For effective measures against the disease and for successful implementation of Union Accord Part III signed at the 4th Union Peace Conference, the Tatmadaw will extend the period of military operations from Sept. 1 to 30 except in the areas where terrorist groups declared by the government take positions,” the Tatmadaw said in a statement on Aug. 24.

The United Nations secretary-general and Pope Francis had called for a global ceasefire to fight together against the pandemic.

Rakhine and Chin states, where the Tatmadaw and the Arakan Army have been locked in a 20-month conflict, remain excluded from the truce.

On March 23, the government designated the Arakan Army a terrorist organization while another group — the Arakan Rohingya Salvation Army — is also classified as a terrorist group whose attacks in August 2017 prompted the military’s crackdown on the Rohingya.

Rakhine was also excluded from the nine-month unilateral truce imposed by the Tatmadaw in 2018.

Fighting is still raging in Rakhine as reports emerge of civilian casualties due to landmines and mortar fire. The renewed conflict in Rakhine and neighboring Chin state has led to scores of civilian fatalities and more than 80,000 people being displaced.

Meanwhile, Rakhine’s capital Sittwe has become a hotspot of Covid-19 with at least 72 locally transmitted cases reported since Aug. 16.

As of Aug. 25, Myanmar had reported 474 cases of Covid-19 with six deaths and 341 recoveries, according to health officials.

This week, the UN and rights groups weighed in on Myanmar over justice and accountability for alleged atrocities committed by the military.

“Myanmar needs to accept an international solution that provides for the safe, voluntary return of Rohingya refugees, while an understandably stretched Bangladesh should not make conditions inhospitable for refugees who have nowhere to go,” Brad Adams, Asia director at HRW, said.

The UNHCR said the solution to the plight of the Rohingya lies with Myanmar comprehensively implementing the recommendations of the Advisory Commission on Rakhine state, to which the government of Myanmar has committed.

“Creating conditions that are conducive to the Rohingya people’s safe and sustainable return will require whole of society engagement, resuming and enhancing the dialogue between the Myanmar authorities and Rohingya refugees as well as other measures that help inspire trust,” UNHCR said in a Aug. 21 statement.

Myanmar has been under legal pressure from the International Court of Justice (ICJ) over the alleged genocide against Rohingya in Rakhine. In January, the ICJ ordered Myanmar’s government to take immediate steps to prevent genocide.