Myanmar to return more 'Bengalis' to Bangladesh this week 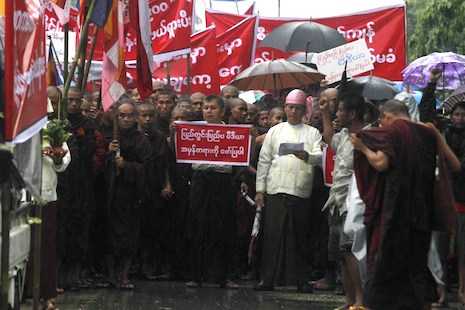 Myanmar Buddhist monks and people from the state of Rakhine shout slogans during a protest against boat people in Sittwe, Rakhine state on Sunday (AFP Photo)

Buddhist hardliners backed by monks staged protests in Myanmar’s Rakhine state on Sunday against help being offered to migrants found adrift in the Bay of Bengal.

Tens of thousands of Rohingya have fled Rakhine in recent years, headed for Malaysia and Indonesia.

A crackdown on human trafficking in Thailand last month triggered a humanitarian crisis when smugglers abandoned their human cargo on land and at sea.

Some 4,500 Rohingya and Bangladeshi migrants have since washed ashore in the region while the UN estimates around 2,000 others are still trapped at sea.

The rescues have angered Buddhist hardliners in Rakhine who regard Muslim Rohingya — one of the world's most persecuted minorities and who have lived in Myanmar for generations — as illegal Bengali immigrants and want them expelled from Myanmar altogether.

More than 1,000 people led by dozens of monks took to the streets of the state capital Sittwe while similar demonstrations took place in nine other towns in the state, according to organizers.

“We protested peacefully to show our disappointment and concern, and deliver a strong message to the government of Myanmar, UN and INGOs that these migrants must be repatriated immediately and that we don’t accept them in the land of Rakhine,” Soe Naing from the Rakhine Social Network and one of the organizers of the Sittwe rally told ucanews.com on Monday.

Rakhine people are seen as villains by the international media and international NGOs, but actually are just protecting their land to prevent the Rakhine community from disappearing, he said.

Zaw Win, a protest leader in Buthidaung, said around 1,000 people protested there.

“The Rakhine community fear conflict may erupt if these migrants stay longer in Rakhine. That’s why we are protesting,” he told ucanews.com on Monday.

He said many in the community feared the whole migrant issue was an attempt to settle Bengalis in Rakhine state.

Of the 900 migrants rescued by the Myanmar navy, some 150 have since been repatriated to Bangladesh.

The rest are being held in border camps while Bangladesh and Myanmar decide their original nationality.

Saw Naing, deputy director of Maungdaw district immigration, said a further 37 have been verified as Bangladeshi.

“We will return these Bangladeshis on June 17,” he told ucanews.com.

“Bangladesh has agreed to cooperate fully to speed up the identification efforts, so I hope the verification process would be finished next week,” said Saw Naing who attended a meeting between Myanmar and Bangladesh immigration officials on Sunday.

Impoverished Rakhine state is a tinderbox of tension between its Buddhist majority and the heavily persecuted Rohingya Muslim minority, who have been confined to displacement camps and host communities segregated from the Rakhine population after deadly unrest erupted there in 2012.

The UN said that over 416,000 people remain in need of humanitarian aid, including almost 140,000 displaced people living in dire conditions in camps and many others without citizenship in isolated villages after three years of communal violence in Rakhine.

“Access to adequate healthcare and livelihoods remained a major concern of displaced people and vulnerable communities across Rakhine state, while restrictions on the freedom of movement of hundreds of thousands of people had severely compromised their basic rights to food, healthcare, education, livelihoods and other basic services, leaving them dependent on humanitarian aid,” the UN’s Office for the Coordination of Humanitarian Affairs said on June 12.