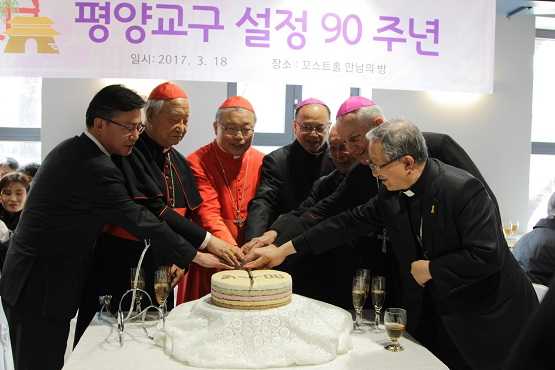 The 90th anniversary of Pyongyanag Diocese was an occasion to pray for North Korea where the once active diocese lies amid totalitarianism.

Some 500 people who belonged to the diocese before the 1950-53 war also attended.

In his homily, Cardinal Yeom said, "Pyongyang Diocese which dynamically spread the gospel now is being forgotten. Communism continues and persecution carries on which is due to our lack of prayer."

Especially given that this is the centennial anniversary of the apparition of Blessed Mother Mary in Fatima who foretold the fall of communism, "Let's pray for the faithful who are suffering under communist rule and those in Pyongyang Diocese," Cardinal Yeom said.

"This should be a starting point to repent, pray and find a new hope," he added.

Seoul Archdiocese, which acts as apostolic administrator of the Diocese of Pyongyang, believes Catholic activity in North Korea represents little more than a show for foreigners amid criticism over religious persecution. Pyongyang Diocese exists only on paper in North Korea.