Public healthcare that fails to care

Medical care is out of reach for India's urban poor 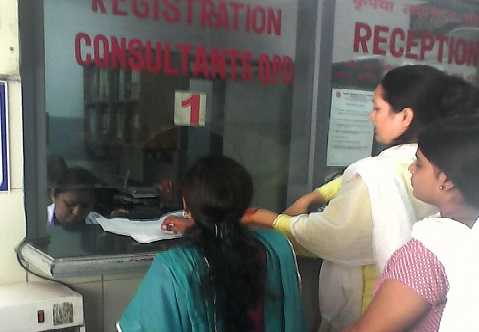 People queue at a government hospital in New Delhi

Malaria-stricken Rukhiya Malik, 27, sits in the corner of a medical facility run by volunteers in a Mumbai suburb. She is hoping for subsidized medicine for an energy-sapping disease that has left her too weak to walk or hold a long conversation.

“I can’t go to big hospitals," she says. "I borrowed money from someone else to come here. Government hospitals are expensive. They charge for blood tests. Where would I get the money from?”

Having lost her father last year and her brother a few months later in a train accident, Malik is the family’s only breadwinner and has an aging mother to look after.

There are thousands like her, in Mumbai, who struggle to cope with the financial burden that illness brings with it. With 20 percent of Mumbai’s population — 3.5 million — living below the poverty line, good medical treatment is a luxury few poor can afford.

instead of the 70 government-run hospitals in India’s financial capital, they can only turn to clinics run by Trusts, which offer medicines at subsidized rates.

“The problem is that the population has increased and the authorities are not able to increase the number of health centers at this rate,” says Ravikanth Singh, who runs one such clinic. Hospitals "are in a pathetic condition” as they lack proper staffing and management.

Singh began his Doctors for You organization with some students from a government medical college in 2007. Within three years, he had launched a medical center in a slum area to provide general check-ups, immunization, dental care and primary health needs of the local community.

Mumbai has several facilities like Singh's but not enough to bring solace to the thousands of poor, who live in crowded slums and eat and drink in highly unhygienic circumstances.

A report on the “State of Health in Mumbai,” published in July by an NGO, said city authorities must focus more on primary healthcare and ensure it caters to fulfilling the needs of the poor.

Shaikh Naranum, 21, battling the first stages of tuberculosis, says she would choose an NGO-run clinic over a government facility for reasons that are not just financial.

Privately run multi-specialty hospitals "are the best but I don’t have money to afford them. I prefer hospitals run by trusts and NGOs … as they treat patients with respect.”

In Mumbai, it is always a case of survival of the fittest, says doctor Chirag Rathod, member of the Hope for the Hopeless team that organizes day-long free medical camps.

“If a person doesn’t have money, the only option they have is a government hospital and because of corruption in the system, patients here are taken for granted,” he says.

The authorities are making efforts to improve matters. In July 2012, the state government launched the Rajeev Gandhi Jeevandayee Yojana project, which provides health insurance coverage of up to 150,000 rupees for families whose annual income is less than 100,000 rupees a year.

The government also claims it has sanctioned up to 1.830 billion rupees (US$3 million) for hospitals to conduct up to 952 medical procedures for patients in the past year.

But government also says some 28 private and charitable hospitals in the city refuse to be part of this pro-poor scheme. Health Minister Suresh Shetty says the refusals are because the government’s fixed rates for treatment are too low.

While such disputes continue, the poor hit by malaria and tuberculosis - and with no possible access to expensive private treatment - have no choice but to deal with apathetic government hospitals or Trust-run clinics.