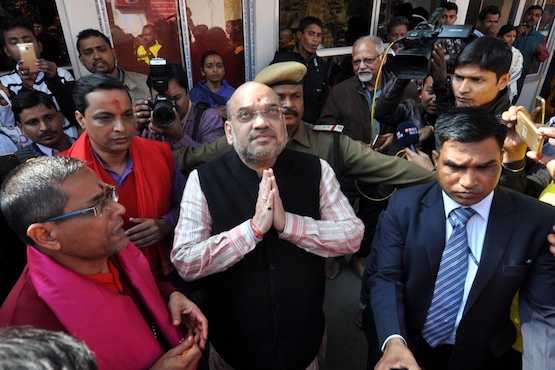 BJP president Amit Shah offers prayers Jan. 6 at a temple in Guwhati, the capital of Assam state in northeastern India, ahead of his tour of Meghalaya, Tripura and Nagaland.

A series of provincial elections due this year in India, including some in Christian strongholds, are expected to set the ball rolling for next year’s general election that will decide the fate of Prime Minister Narendra Modi and his pro-Hindu party.

These days every political move in the nation raises the same basic question in the media: Could Modi, known for theatrically blending economic development with his zealot Hindu nationalism, win another term in 2019?

Most surveys have found Modi to be the most popular politician in the world’s most populous democracy of 1.2 billion people, 30 percent of them illiterate. But that cannot ensure him of another term in power.

“The myth about Modi’s invincibility has been broken in the Gujarat election” last December, said R. Lyngdoh, leader of the opposition Congress party in the Christian-dominated Meghalaya state, where elections are due in February.

Modi’s Bharatiya Janata Party (BJP) narrowly managed to win just 99 seats to retain power in the 182-member Gujarat house. In fact, it lost 16 sitting seats while Congress gained 16 seats from the last election to improve its number to 77.

“It showed the fault lines in BJP’s election strategy, however good they may be. And they can be humbled,” Lyngdoh said.

The Gujarat polls have changed impressions and given renewed impetus to Congress, which could be reflected in the provincial elections this year, according to political observer Anshuman Rao based in Hyderabad city.

The Gujarat election “actually gives an impression that Congress under its new president Rahul Gandhi is showing purpose in its actions and could challenge Modi. Rahul’s arrival also means that the 2019 battle will not be one-sided,” he said.

The issues that put Modi and BJP on the defensive in Gujarat are also “relevant for all the states” that go to the polls this year, said K. T. Chuba, Congress leader in Nagaland state.

The Christian-majority states of Nagaland and Meghalaya along with Tripura must get a new government by March. While Karnataka is to elect a government in May, elections must be conducted by the end of this year in four other states — Mizoram, Madhya Pradesh, Chhattisgarh and Rajasthan.

Gujarat elections showed that “people are angry” with the BJP and Modi because of issues like “farmers’ distress, unemployment, a sloppy tax system and ill-advised economic decisions,” Chuba told ucanews.com.

“The same yardstick and issues will apply to the elections in other states,” particularly in Madhya Pradesh and Chhattisgarh, where the BJP has been winning elections since 2003, he said.

But the BJP has a better chance in the Christian-majority states of Nagaland and Mizoram, observers say.

J. A. Lyngdoh, a BJP leader in Catholic-majority Meghalaya, said the BJP’s only promise is to provide a corruption-free government focused on people’s socioeconomic development in the state.

The hilly state state’s 2.9 million people, of whom 75 percent are Christians, will accept the BJP to end the 15-year rule of Congress, Lyngdoh said.

In Baptist-majority Nagaland, the BJP already shares power in a coalition led by the state-based Nagaland People’s Front.

Christians, who make up 90 percent of Nagaland’s 1.9 million people, cannot be bothered with the Hindu nationalism of the BJP, said a Christian leader who asked not to be named.

Ethnic Naga people, who form the majority in the state, look toward supporting a federal government that will support their regional government to help accelerate their development, the Christian leader said.

In states where non-Hindus are politically decisive, the BJP employs a singular political strategy of aligning with regional parties.

In Meghalaya, the BJP works to attract “non-Christian local tribal groups” who continue to practice age-old aboriginal customs and socio-religious practices, said Meghalaya Congress leader R. Lyngdoh, who is not related to the BJP leader.

He said most people in his state are upset with the BJP.  Party policies, which includes attempts to ban beef, have not gone down well with people for whom beef is a staple, he said.

However, in the last two months, more than a dozen Congress legislators and former ministers have joined the BJP, indicating an electoral mood change in both Meghalaya and Tripura.

In both states, the BJP seems to be in striking distance of power, either alone or in alliance with smaller regional parties like the National People’s Party, which was founded by the late P.A. Sangma, a prominent Christian leader.

The BJP senses the mood change and is presenting itself as the champion of good governance to replace corruption-accused governments such as the communist-led government in Tripura.

BJP chief Amit Shah toured Meghalaya and Tripura last week. In Tripura Jan. 7, he promised to file charges against corruption-accused ministers and bring them before the courts if the BJP comes to power.

The Communist Party of India, which has run the Tripura government since 1998, has faced numerous allegations of corruption, with its ministers accused of nepotism and favoritism.  A court order recently indicted the communist regime for the faulty appointment of 10,023 primary school teachers.

However, he had a warning for Congress well-wishers. “In electoral politics, the last-minute delivery — booth management — is important. It means there is no replacement for good organisation. This is lacking in Congress.”