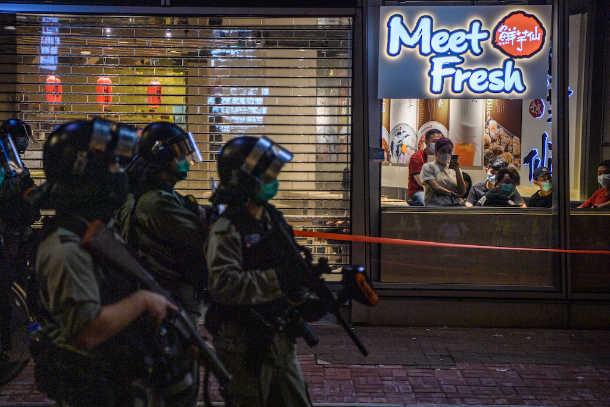 Protesters attend a pro-democracy rally against a proposed new security law in Hong Kong on May 24. The proposed legislation is expected to ban treason, subversion and sedition. (Photo: Anthony Wallace/AFP)

Beijing-backed police in Hong Kong used tear gas and water cannons to disperse thousands of pro-democracy protesters gathered on May 24 to protest China's plan to enforce a law that is feared will end the autonomy of the city-state.

The former British colony was handed over to China in 1997 with an agreement to administer it with a "one country, two systems" policy that allows Hong Kong to have its own legislature and autonomy, unlike in mainland China. "But the new legislation means 'one country, two systems' is over in Hong Kong" because it puts "the power of interpretation in the hands of China again," said Lui. The Chinese Communist Party (CCP) regime could interpret any action that does not toe its line as an act of subversion or separatism and arrest people, Lui told UCA News. Police arrested at least 180 protesters on May 24 on charges of illegal assembly and misuse of public places. Chinese officials also told media that pro-democracy demonstrators are terrorists. China planned the new law directly to check the pro-democracy movement started in June last year. It began as a protest against another law passed in the Hong Kong legislature that would have allowed people arrested in Hong Kong to be extradited to China. Hong Kong's government later withdrew the law but protests continued over what protesters say is the shrinking democratic space in Hong Kong ever since China took over the territory. Lui said Hong Kong people are "fighting to uphold their own beliefs in the rule of law, human rights and democracy." Hong Kong has its own Basic Law, a mini-constitution that governs its internal affairs and security, but the new law undermines it, protesters say. China's Foreign Minister Wang Yi told reporters in Beijing that the proposed law aims to stop "anti-government protests" and "sedition" in Hong Kong. It has become a "pressing obligation" of the Chinese government to protect the integrity of the nation, he said. Jackie Hung, a project officer of Hong Kong Diocese's Justice and Peace Commission, said it was "shocking that the Chinese authorities have repeatedly interfered in Hong Kong's affairs" and bypassed the Hong Kong Legislative Council. The police continue to abuse power to unleash violence on people and arrest peaceful protesters "under restrictive orders and riot charges," Hung told UCA News. "The government is using even slightest pretexts to arrest people. It may even ban religious activities on the grounds of national security," she said. The Civil Human Rights Front, the Hong Kong Alliance in Support of Patriotic Democratic Movements of China, and the Justice and Peace Commission are among the rights groups that support the pro-democracy movement. These organizations at a press conference on May 22 rejected the national security law as unwarranted. They blamed the CCP for the current unrest in Hong Kong. Lui said the new national security law, which the US has openly rejected, will affect Sino-US relations. The US administration could harden its stand against China in the coming days, he said. On May 24, Robert O'Brien, the White House national security adviser, said the law could lead to US sanctions. A US law passed last year requires the government to impose sanctions against those undermining Hong Kong's autonomy. "It looks like, with this national security law, they are going to basically take over Hong Kong," O'Brien told a news network. US Secretary of State Mike Pompeo also condemned the plan, describing it as the "death knell" for Hong Kong's freedom. The UK, Australia and Canada have also expressed their "deep concern" over China's move.