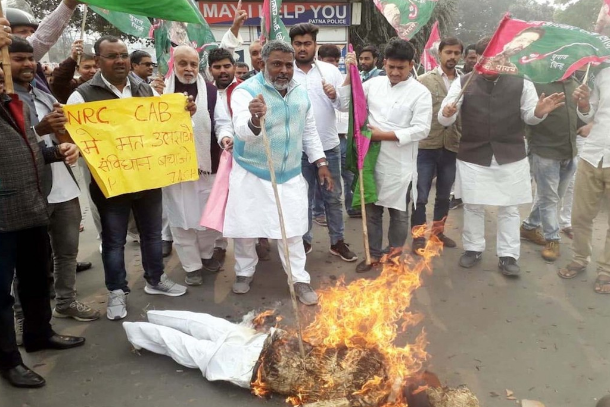 Protesters demonstrate against the Citizenship (Amendment) Bill in Patna on Dec 12. They say the law discriminates against people based on religion. (Photo: IANS)

Church leaders have appealed for peace in northeastern India, where police shot dead two people as violent protests spread against the federal government amending the law on citizenship.

The Citizenship (Amendment) Bill, passed by the national parliament on Dec. 11, is seen as discriminatory on religious grounds. It gives citizenship to migrants from Afghanistan, Bangladesh and Pakistan if they are not Muslims.

The bill also reduces the requirement of residence for these migrants from 11 years to six years if they arrived in India on or before December 2014.

Indigenous groups in the region believe the law gives citizenship to millions of immigrants who came from neighboring Bangladesh following its independence in 1971. Regardless of religion, they believe the move will change the demographics of their region.

Chuch leaders such as retired Archbishop Thomas Menamparampil of Guwahati say the controversial law was needless.

"It was passed discriminating some groups," said the prelate, who is a member of Assam Citizens' Forum. "We, along with the people of Assam, regardless of faith, call for calm and peace during these difficult times. We want all to be united."

The Salesian bishop said political leaders should have taken the people into confidence. He said the law threatens small ethnic groups in the region "who have lived here for centuries."

The Congress party, which opposes the ruling pro-Hindu Bharatiya Janata Party (BJP), said the situation in the region was "extremely disturbing."

It accused the BJP of "insulting, ignoring and forgetting" the people of the northeast. It alleged the BJP provoked "this level of outrage" in the region.
Related News In its efforts to contain the violence and protests, the federal government sent paramilitary forces and cut the internet in several cities, inviting criticism from opposition politicians and rights groups.

Tripura also faced mass protests from local people who believe the law will regularize illegal migrants, reducing them to a minority in their land.

"We pray all sections of our people can live in peace. The ethnic people in our state are disturbed," Father Pulinthanath said.

The government moved ahead with the bill without addressing the concerns of people. "Now, there is much tension," the priest said.

Congress leader Ghulam Nabi Azad said the law was unconstitutional and the move to suppress people's opposition was a violation of rights.

The communist-led government in Kerala said it would not implement the "unconstitutional" law in the southern state. Chief Minister Pinarayi Vijayan said the state could not tolerate any discrimination based on religion.

Congress-ruled Punjab state has also decided not to implement the law. Chief Minister Amarinder Singh said the Congress will use its two-thirds majority in the state legislature to block the "unconstitutional" legislation.