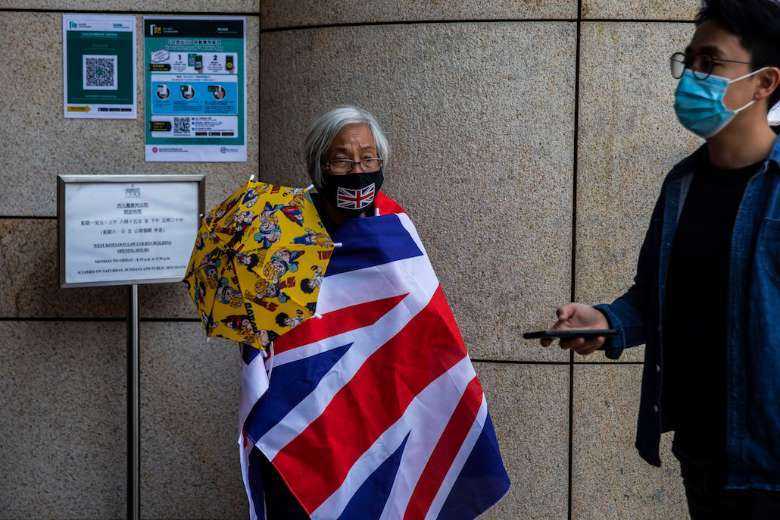 Alexandra Wong, an activist known as Grandma Wong, stands outside West Kowloon court in Hong Kong on March 2 during court appearances by dozens of dissidents charged with subversion in the largest use yet of Beijing's sweeping new national security law. (Photo: AFP)

Hundreds of protesters ignored government warnings and gathered outside a Hong Kong court where a bail hearing for 47 people charged with conspiracy to commit subversion under a sweeping new security law entered a second day on March 2.

Chanting the banned slogans “Liberate Hong Kong! Revolution of our time!” and “Fight for freedom, stand with Hong Kong,” demonstrators demanded their release from what was the largest single crackdown on the democratic opposition under the security law.

Protests have been rare in recent months.

The 47 were charged on Feb. 28 for their involvement in a “massive and well-organized scheme to subvert the Hong Kong government” after organizing an unofficial primary election last July ahead of legislative elections due in September. They were postponed due to the Covid-19 pandemic.

The unofficial primary, a standard concept in Western democracies like the US, Australia or New Zealand, drew more than 600,000 voters in defiance of pro-Beijing lobbyists who are demanding that only Chinese “patriots” be allowed to run for office.

The controversial Beijing-imposed national security law was introduced last year and carries a maximum penalty of life in prison for subversion. Security was tight as police warned those outside the court could also be arrested under the new law.

The hearing was initially expected to last just a few hours, but prosecutor Maggie Yang argued for a postponement until May 31, saying police needed more time for further investigations into digital devices seized including computers, hard drives, mobile phones and SIM cards.

The delay was opposed by most defense lawyers.

Others say the law betrays China’s promise of a “one country, two systems” framework that was supposed to allow Hong Kong to maintain its own legal system and established civil liberties for 50 years following the handover from Britain to Chinese control in 1997.

“After a year of social unrest with fear for personal safety, Hong Kong people can once again enjoy their basic rights and freedoms, according to the law,” Lam said in her annual address late last year.

Hong Kong police say 99 people have to date been arrested under the new security law.