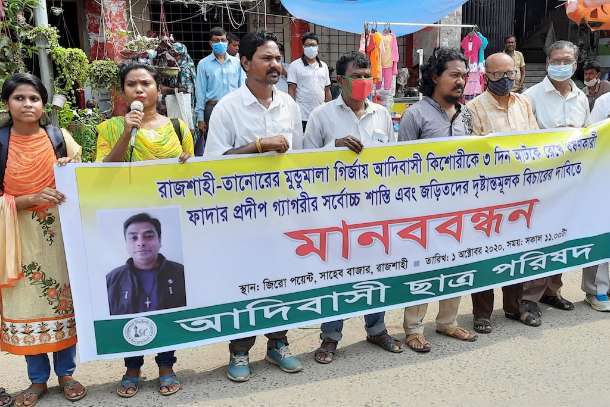 Members of the Indigenous Students Council hold a protest in Rajshahi city on Oct. 1 about the rape of a 14-year-old ethnic girl. (Photo supplied)

Ethnic and rights groups have organized protest rallies in northern Bangladesh demanding exemplary punishment for a Catholic priest accused of rape and for church and community leaders who tried to protect him with an out-of-court settlement.

The protests have been in response to the arrest of Father Prodip Gregory, 41, parish priest of St. John Mary Vianney’s Church in Mundumala, covered by Rajshahi Diocese, on Sept. 29.

Father Gregory, now suspended from priestly ministry, is accused of confining and raping a 14-year-old ethnic girl for three days from Sept. 26-28. He was arrested after the elder brother of the victim filed a rape case against him at Tanore Police Station in Rajshahi district.

Media reported that following the discovery of the girl in the priest’s rectory on Sept. 28, an arbitration meeting led by church officials and community leaders attempted to reach an out-of-court settlement through monetary and other compensation, but the victim's family rejected the offer and lodged a complaint with police.

In 2010, when Father Gregory was at Sacred Heart of Jesus Church in Benedwar of Naogaon district, a similar allegation of a sexual offense on a minor girl surfaced against the priest, but it was hushed up by the diocese with the temporary suspension of the priest, local Catholics told UCA News.

The latest incident sparked a public and media backlash and caused a storm on social media site Facebook.

From Oct. 1-5, ethnic rights groups organized rallies to condemn the rape case and to demand punishment. They were attended by both Christians and non-Christians as well as prominent people of other faiths including rights activists.

The Indigenous Students Council (ISC) has been at the forefront of protests.

“We demand heavy and exemplary punishment for the priest for committing such a heinous crime. We are frustrated to know there have been efforts to cover up the case from the Bishop’s House of Rajshahi. We also want to see those who tried to shelter and support the criminal priest face legal action,” ISC president Nokul Pahan told UCA News.

Pahan, an ethnic Munda and Hindu, alleged that a cover-up of the priest’s previous offense had encouraged him to commit the same offense again. “A criminal is a criminal no matter which religion or society he belongs to. Those who support or shelter them are also criminal and must be punished,” he added.

A 40-year-old Catholic NGO activist who attended one of the rallies said he felt “ashamed” as a Christian to see such a crime takes place in the Church.

“As a Christian I feel sad and ashamed, but it is my humanitarian duty to raise my voice for justice. Our religion is good but church leaders have failed to discipline clergy who have been immoral in the past and now ugly things have started to come out and tarnish the image of the Christian community,” he told UCA News on condition of anonymity.

Rakibul Hasan, officer in charge of Tanore Police Station, said medical tests on the girl had been completed and police were awaiting a report to submit to a court.

“In her primary statement before the court, the girl said that the priest had raped her,” Hasan told UCA News.

A medical officer from the One-Stop Crisis Center of Rajshahi Medical College Hospital declined to reveal the outcome of the tests. “This kind of important report is submitted to the court directly,” the officer told UCA News.