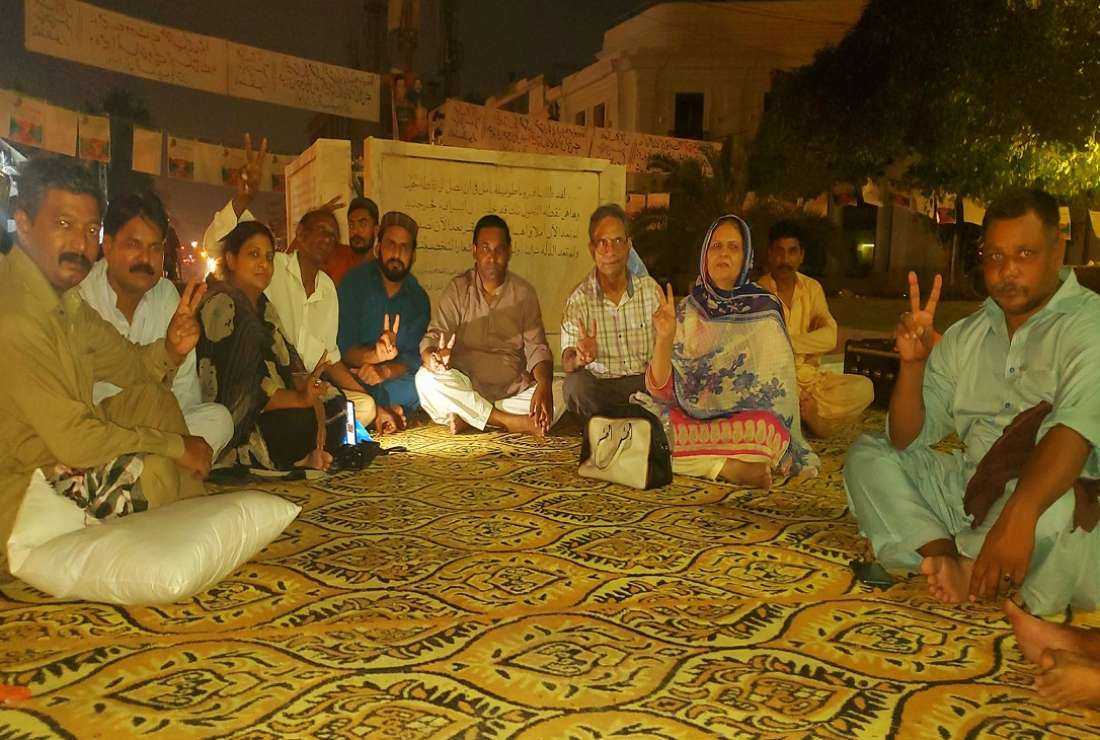 Activists from the Rawadari Tehreek group stage a hunger strike on Aug 10, ahead of the National Day of Minorities, in Lahore, Pakistan. (Photo: Samson Salamat)

Pakistani Christians nationwide marked the National Day of Minorities on Aug. 11 with calls for direct voting for minority MPs to stop forced conversions of non-Muslim girls and misuse of the anti-blasphemy law.

More than a hundred activists of the interfaith Rawadari Tehreek (Movement for Tolerance) group staged a hunger strike in front of the Punjab Provincial Assembly in Lahore on Aug. 10-11 to reject the reserved seats for minority parliamentarians and demanded urgent reforms to elect their representatives with their own votes.

“No to selection!” cried protesters who braved Lahore’s summer heat and humidity while sleeping on the pavement overnight.

Under the current system, religious minorities join others in voting for local representation in the national and provincial assemblies.

The Muslim leadership of the mainstream political parties only selects non-Muslim candidates by granting them tickets for the few seats reserved for minorities.

Currently, religious minorities can contest only 33 reserved seats in provincial assemblies and four seats in the Senate.

“This system practically takes away the democratic powers and rights from minority voters to elect their parliamentarians and instead power remains with the political parties and political elite. Merit is ignored. As a result, parliamentarians with minority seats follow party lines rather than focus on minority issues which remain unheard in parliament,” Samson Salamat, the Christian chairman of Rwadari Tehreek, told UCA News.

Masih was accused of uttering blasphemous comments about the Prophet Muhammad at his shop in 2017 a few days after a dispute involving a Muslim customer.

According to the annual Human Rights Monitor of the Catholic Bishop's National Commission for Justice and Peace, 54 people were charged under the blasphemy law last year. These included 23 Muslims, 11 Christians, 14 Ahmadis and six Hindus.

Activists of Voice for Justice (VFJ) held demonstrations on Aug. 11 in five cities demanding the protection of religious freedom.

"Recognition of minority and human rights is imperative for stability"

“An autonomous and independent statutory National Council for Minorities must be constituted with a mandate to monitor the implementation of rights of minorities, to oversee policies and give advice on policy matters. Recognition of minority and human rights is imperative for stability,” said Ashiknaz Khokhar, a Catholic executive member of VFJ who organized a protest in Sahiwal, Punjab province.

“Long live Pakistan” chanted uniformed students as the prelate led a rally in the cathedral compound.

“We pray together to work for the prosperity of the country as per the vision of Pakistan's founder Muhammad Ali Jinnah. Everyone should work together to take the country out of challenges. May God hear our prayers,” he said addressing the gathering.

Shahbaz Bhatti, the Catholic federal minister for minorities, led the campaign to have Aug. 11 declared National Day of Minorities in 2009. He was assassinated in 2011 in a gun attack in Islamabad.