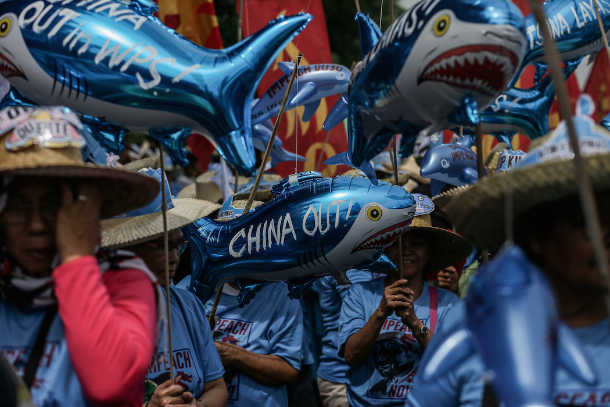 Protesters call for a stronger stand against the alleged intrusion of China into Philippine territory during President Rodrigo Duterte's State of the Nation address on July 22. (Photo by Basilio Sepe)

Protesters marched in the streets of Manila on July 22 to condemn what they described as widespread rights abuses and the intrusion of China into Philippine territory.

Priests, nuns, and seminarians joined activists who called for the impeachment of President Rodrigo Duterte as he delivered his State of the Nation Address (SONA). The protesters braved the rain as they marched, carrying placards and effigies, which they later burned, in what they called a "United People’s SONA" outside Congress.

The president's speech, which lasted for almost two hours, tackled various issues, including his government’s war against narcotics, corruption and the re-introduction of the death penalty. Duterte asserted the country's ownership of parts of the South China Sea even as he admitted allowing China to "utilize resources" in the country's exclusive economic zone. He boasted that the poverty fell from 27.6 percent in the first half of 2015 to 21 percent in 2018, a period taking in the first half of his six-year term. The president said the goal of his administration in the next three years is a "comfortable life" for all Filipinos. Protesters brave the rain during a protest in Manila while Philippine President Rodrigo Duterte gave his State of the Nation address on July 22. (Photo by Jire Carreon)

Most trying period in history

Church leaders, however, said the Philippines is experiencing "the most trying period in the nation’s history" under Duterte.

"A vision of a country where peace and justice reigns, sovereignty is cherished and human rights are upheld ... has been sliding into oblivion," said the Ecumenical Bishops' Forum. The pastors of various churches said the Philippines is "in crisis and it's not only social and political, but also moral and spiritual." "The regression of our country’s democracy, the emboldenment of a tyrannical regime and the oppression of the people are fueling a national catastrophe," they said. They prelates added that the people are "summoned to muster courage and rediscover collective responsibility" for the nation’s welfare. "We must not cower against evil, but instead stand up against it," they added. "We must speak out for positive change and genuine reforms to regain our country’s democracy, restore our people’s freedom and rebuild our nation," they said. Catholic Bishop Deogracias Iniguez, head of the Ecumenical Bishops’ Forum, called on the president to "heed the cry of the Filipino people and rely on the truth." Father Edwin Gariguez, executive secretary of the social action arm of the Catholic bishops’ conference, lambasted Duterte’s "unpatriotic and cowardly stance" on the South China Sea dispute. He said the Philippines should take a "tougher stand" against China. In his address, Duterte justified a "fishing deal" with China as a "delicate balancing act" to avoid conflict with a powerful neighbor. The Promotion of Church People’s Response, an influential ecumenical lay organization, said it was "outraged" by the government’s "feebleness and impotence" in protecting the country's sovereignty. Philippine President Rodrigo Duterte delivers his fourth State of the Nation address before a joint session of Congress on July 22. (Photo courtesy of the Presidential Communications Office)

Bishop Antonio Tobias of Novaliches said the international community should look into what he described as the "silent persecution" of the Philippine people.

"Please come. Come and see the country and observe the silent persecution that is happening against the people and the Church," said the prelate. The bishop officiated a "Mass for Truth" attended by activists and protesters before the president's address. Bishop Tobias was one of three Catholic bishops charged with sedition and libel last week for allegedly linking the president’s family to the illegal drugs trade.

The bishop said church leaders are being persecuted even as they do their best to help families of victims of drug-related killings.

He said when Duterte came to power in 2016 he promised to get rid of the drug problem. "After three years, the number of drug users increased and many have died," the bishop said. "It is the Church that is looking after those who survived the killings, giving them a chance to lead a new life," said Bishop Tobias. "Is this how the government repays the Church for everything that it has done?" the prelate said when asked about his reaction to the charges filed against him. One of Duterte's promises during his address was to reinstate capital punishment for heinous crimes, an move opposed by church groups. "We have not learned our lesson," Duterte said. "Drugs will continue unless corruption is eliminated," he said. "We have a long way to go against this social menace." He then urged Congress to reinstate the death penalty for heinous crimes, in particular for offenses related to illegal drugs as well as plunder. The death penalty bill faced strong opposition from senators during the last Congress. The House of Representatives, however, passed the proposed measure. Mark Saludes contributed to this report.