Students paint a message on a sidewalk at the University of Hong Kong on June 4 to remember the victims of the 1989 Tiananmen Square massacre. The territory's academic freedom is expected to be squeezed by new security laws. (Photo: AFP)

The new security laws that the ruling Chinese Communist Party (CCP) intends to impose on Hong Kong have only sharpened long-held fears about academic freedom in the city’s universities. But the struggle is not new — it has been ongoing since the Chinese takeover of the territory from Britain in 1997 and was ramped up in 2005.

It is clear Hong Kong’s universities have already been considerably cowed both internally and externally by Beijing and its proxy, the Hong Kong chief executive — presently Carrie Lam.

They all lined up to all pay lip service of varying strength to the new laws, trapped between their already fading commitment to academic freedom and their desire to play ball with the authorities in charge of appointments to university boards.

The struggle in Hong Kong’s academe has been going on for many years. Many regard the “unhiring” of the respected Johannes Chan from the University of Hong Kong’s law school in 2005 as a turning point, with self-censorship and ever-increasing restrictions making themselves felt since then.

Academic freedom is key to any truly successful university in turning out graduates who can think critically. In turn, good universities are a major benefit to free and open societies. In the authoritarian world, such as that on the Chinese mainland, thought is restricted like the societies that police states create. 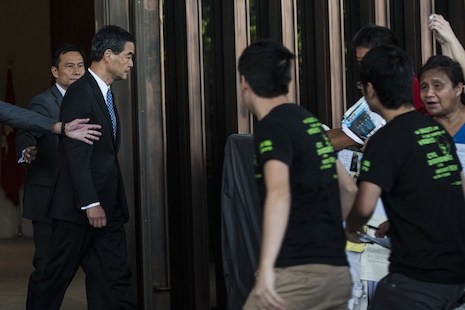 It has been clear since the security laws were raised at the annual National People’s Congress in Beijing last month that they target students at Hong Kong universities who have been at the forefront of protests that are now about to enter their second year. The ongoing nature of the protests has embarrassed Beijing and there is fear in the CCP of the dissent and discontent spreading to the mainland. The announcement of the laws came with multiple official commentaries about the need to reform education in Hong Kong.

Beijing had decided to crack down on Hong Kong with these unprecedented laws at the ruling Communist Party’s October Plenum. The new laws will rip open an irreparable hole in the Basic Law that has governed the city since the 1997 handover.

That students would lay siege to their institutions the following month will only further embolden Beijing to take action. Lam has already promised to overhaul liberal arts education in the city —including history that the CCP has shown it is keen to rewrite or even erase.

With all this going on, the long-held dream of a Catholic university in the territory looks increasingly likely to be a casualty of Beijing’s increased control.

Plans for a Catholic university have been around since the city’s first ethnic Chinese bishop, Francis Hsu, proposed the idea during his 1969-73 prelature. Some years later, in 1985, Catholic social services group Caritas, which has substantial operations in Hong Kong, founded Caritas Francis Hsu College. This is known as a post-secondary college and has campuses in Kowloon Tong, Kowloon and Tseung Kwan O.

In 2011, it was renamed the Caritas Institute of Higher Education and offers courses up to bachelor's degree level. One of its mottos is “Towards a Catholic University.”

“Our vision is to become St. Francis University, with a strong foundation in the values of inclusivity, ethics, solid education and employability, providing flexible pathways of further studies for all and enabling students to move up the social ladder,” president Kim Mak said on the institution’s website.

The fact is that with Beijing taking more control of Hong Kong, the Church in the city will be more immediately concerned with maintaining its unique status of being directly answerable to Pope Francis and having its own cardinals despite being nominally part of the Archdiocese of Guangzhou.

The CCP shuttered all Catholic educational institutions when it came to power seven decades ago. It has always seen the Church as something of a threat, and this has never been clearer than under the iron fist of its current leader Xi Jinping and his ongoing campaign against religion, especially Christianity and Islam.

A Catholic university would add diversity to Hong Kong’s tertiary education sector, but right now Mak will likely be hoping he can save Caritas Institute’s courses and some semblance of academic self-respect rather than agitating for an upgrade.