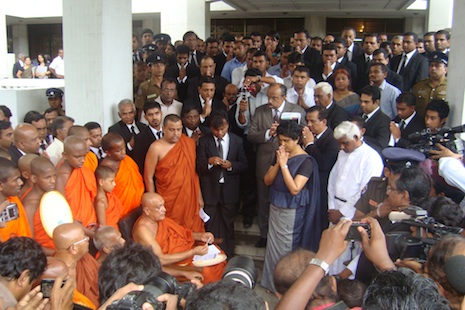 More than a thousand protesters including hundreds of judges and lawyers demonstrated today at the Supreme Court complex in the capital for the protection of the country’s judiciary against political interference.

The protest was part of ongoing opposition to the impeachment of Chief Justice Shirani Bandaranayake, who appeared today before the Parliamentary Select Committee amid heavy security.

Bandaranayake, the country’s first female chief justice, has been charged with 14 counts including failure to adequately declare her assets, improper conduct and improperly influencing the process of justice.

She is accused among other things of maintaining as many as nine bank accounts that were not revealed in her asset declaration upon taking office in May 2011. She is also accused of failing to declare about US$250,000 in foreign currency.

Bandaranayake has denied any wrongdoing.

Venerable Maduluwave Sobitha Thero, Sri Lanka's head monk of Kotte Naga Vihara, blessed Bandaranayake as she arrived at the hearing and warned that her impeachment posed a grave threat to democracy.

“This is very unfair and the lawmakers who made the impeachment complaint are heading the trial as well,” he said.

The parliamentary committee comprises seven members from the government’s ruling party and four from other parties.

“Everybody knows what their judgment will be.”

He added: “We have a crucial role to play to protect the independence of the judiciary, for there is no other place for people to go for justice.”

J.C. Weliamuna, a human rights lawyer and former executive director of the anti-corruption organization Transparency International in Sri Lanka, said the committee hearing had nothing to do with justice.

“How can legislators who have made the complaint legitimately hear the case and make a fair judgment,” he said.

“Is this the example the country wants to show the world?”

Father Reid Shelton Fernando told the gathering of protesters today that a united stand against the proceedings was necessary to avoid the government’s dictatorial approach.

“Even the four chief Buddhist monks as well as the Catholic Bishops’ Conference had urged the government to abandon the impeachment trial – all to no avail,” he said.

“So our strength is unity, and let us do everything possible to save the judiciary at this crucial juncture.”

Meanwhile an estimated 5,000 government supporters gathered near the demonstration to voice their support for the impeachment proceedings and to call for Bandaranayake’s immediate resignation.