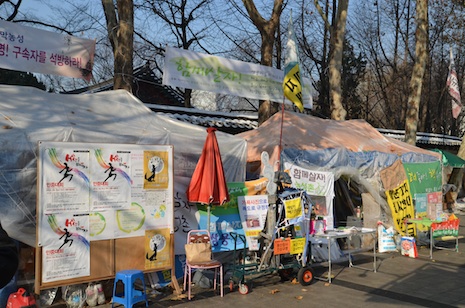 The tents of the 'Live Together' protesters in downtown Seoul

If you cross the street between Seoul Plaza and Deogsu-gung Palace in the heart of the bustling capital, you will find a small village beside Daehanmun, the palace’s main gate.

This temporary village comprises three tents that house 10 ‘villagers’ engaged in a sit-in protest to draw attention to the plight of marginalized communities in Korea.

In particular, the village aims to highlight the plight of laid-off workers from the Ssangyong Motors plant, evicted residents of the Yongsan redevelopment project, Gangjeong villagers opposing the construction of a naval base on Jeju island, and activists opposing nuclear power, says Andrew Kim Deok-jin, one of the protesters.

“We are asking for the reinstatement of laid-off workers, a stop to the Jeju naval base construction, a fact-finding mission on the deaths of evicted residents of Yongsan, and a stop to the construction of new nuclear power plants,” he said.

“When you look around here, you can see the brand-new Seoul City Hall building, five-star hotels, traffic filling the streets and the twinkle of seasonal lights,” Kim said.

“People tend to see only the bright aspects of society, not the much darker side. So we are here to ask people to open their eyes.”

The sit-in village near the palace is the work of SKY-Act, a coalition of Ssangyong workers, Gangjeong villagers and Yongsan residents, who led a nationwide pilgrimage earlier this year to hear the voices of the voiceless.

“While walking through the country, we experienced the pains and sorrows of Ssangyong, Gangjeong and Yongsan from all over the country. All the country is suffering,” said Father Bartholomew Mun Jung-hyun, who led the pilgrimage.

“We could feel how the layoffs make workers’ lives impoverished. I really doubt whether this is a country where ordinary people can still live,” he said.

At the end of the pilgrimage, which finished on November 4, participants decided to set up the tent village next to a memorial tent previously constructed to commemorate the deaths of several Ssangyong workers who died after the mass layoffs in 2009.

“Since the layoffs, 23 former workers and family members committed suicide. Layoffs mean death. We can no longer endure the sacrifice of workers,” said Kim Jeong-woo, president of the Ssangyong trade union.

Many of the Ssangyong workers who lost their jobs complained of depression, psychological illnesses and other problems following a 77-day strike at the Pyeongtaek plant that ended in a police raid in August 2009. More than 2,500 factory employees lost their jobs.

Trade unionist Kim said the workers were laid off on the basis of false accounting that said the company was operating on a 500 billion won (US$467 million) deficit and is urging the government to conduct an official review.

“Without it, we will keep suffering from the high-handedness of business leaders,” he said.

Jeon Jae-suk, a former Yongsan resident, lost her husband during what has become known as the “Yongsan incident.”

In January 2009, six people including one police officer were killed after a tactical police unit stormed the four-story Namildang building at the Yongsan redevelopment site in central Seoul.

The police operation aimed to remove 40 tenants who were protesting the project.

“We went up to the lookout post on the rooftop to try to save ourselves. But the police raid devastated us. My husband burned to death, and my son was arrested and charged with the death of a police officer,” she said.

“Many people have been displaced by redevelopment projects. Our demand is simple. Instead of taking our homes, give us other places to live and an opportunity to make a living.”

The sit-in occupants of the tent city say that police have threatened several times to evict them for illegall assemby, but so far they have not followed through on the threats.

Now that the elections are over, though, some of the protesters fear a crackdown in the wake of the conservative Saenuri Party candidate Park Geun-hye’s presidential victory.

Moon Jae-in, the Democratic United Party candidate in the election, visited the tent village to express his concern over the issues being protested during his unsuccessful campaign. But Park did not, which has fueled fears of an imminent crackdown.

“Some have said to me that they would leave the country or quit the campaign after the election. They are in despair and I understand their feelings,” said Moon, who was imprisoned twice during the regime of Park’s father, the late president Park Chung-hee, who ruled Korea from 1961 to 1979.

But Moon remains steadfast in support of the sit-in protest.

“We have lived at least 40 years like this since the 1970s, and there has been no specific progress. But we should not give up. We should continue to fight for our right to live as proper human beings.”

Trade unionist Kim says only time will tell whether the new president will bring the change she promised.

“Park promised communication and ‘great unity’ among South Koreans during her election campaign. I’d like to wait and see if she keeps the promise,” he said.

“If not, we will again make a strong protest, this time against her government.”