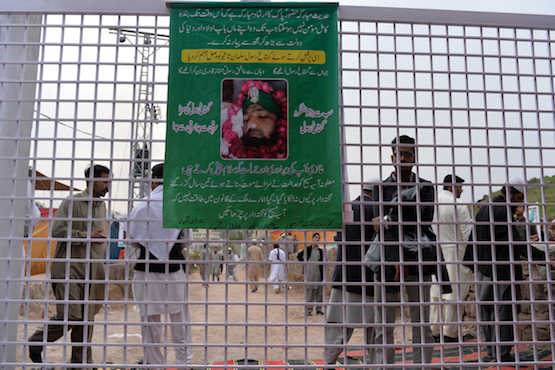 Pakistani followers arrive at the tomb of Mumtaz Qadri, who was hanged in 2016 for the murder of a governor who criticized Pakistan's blasphemy law and defended a Christian woman. The state's decision to execute him provoked uproar among Islamists. (Photo by Aamir Qureshi/AFP)

Muslims have started a protest against Protestant church officials in Pakistan for helping a Christian teenager accused of blasphemy.

Bishop Emmanuel of Betania Church in Shahdara in Punjab province is being denied entrance to a village where protests erupted on Feb. 19 against 18-year-old Patras Masih.

Masih was arrested on the same day after a local cleric made a blasphemy complaint about an allegedly sacrilegious photograph on Facebook.

Armed police have cordoned off the locality as more than 1,000 Christian families, laborers and sanitary workers remain in hiding.

An iron lock now hangs on the blue door of Masih's house in Dhir village on the outskirts of Shahdara. A wall still carries a poster of a monthly Christian convention.

A hate campaign has started against Masih. Posters carrying his photo with a cross are displayed near the Ravi River bridge connecting Shahdara with Lahore.

"A Christian woman asked me to lock the door from outside after her family got inside the home. We are protecting empty houses from possible thefts. They can all return but the bishop must leave the community," Muhammad Sadiq, a local electrician, told ucanews.com.

"We wanted to catch the blasphemer but the bishop informed him about our protest, relocated the family and then handed over the blasphemer to police. We want his clarification if there was no such involvement."

Similar demands were raised by activists of Tehreek-e-Labaik, an Islamist political party which brought the capital Islamabad to a standstill last November and forced the resignation of a minister accused of blasphemy.

A delegation from Ulema Aman Committee Punjab (UACP) visited Dhir village on Feb. 21 and shared the news of a peace accord. Punjab's government officiated the agreement in which Christian activists and pastors guaranteed to respect the Muslim faith, matters and festivals.

"The blasphemer must be killed for kufr (infidelity) but the rest of the community must continue living in harmony," said UACP chairman Tanveer Hussain Muhammadi.

"Some allege that Masih photoshopped his own image on Roza-e-Rasool, the burial place of the Prophet Muhammad in Medina. The bishop was controversial for holding unscheduled prayer programs at his residence and using loudspeakers."

Pastor Sanfia Bashir of Betania Church is unsure if prayers will go ahead on Feb. 25.

"Police have been stationed for a reason. I have been asked to stay alert. We are obliged to obey the laws of our country. I was in constant touch with the victim's family on the phone and only followed the legal procedure in handling this case," he said.

Most Christians in Dhir belong to the Evangelical Christian Assembly, with about 100 Catholics.

The number of Christians in Pakistan was estimated at 2.5 million in 2005 or 1.6 percent of the population, with an equal split between Catholics and Protestants.