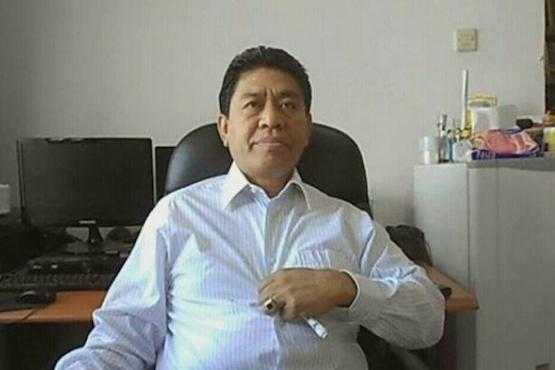 Reverend Abraham Ben Moses was caught on video allegedly trying to convert a Muslim taxi driver to Christianity. Police are investigating the case and Rev. Moses is being held in custody. (Photo supplied)

A Protestant pastor is facing a possible prison term in Indonesia after being named as a suspect in a blasphemy case.

It is the first time a Christian cleric has been accused of blasphemy in the predominantly Muslim country, religious leaders say.

Reverend Abraham Ben Moses, 52, has been detained at a Jakarta police station for more than a week following his arrest at his home in Tangerang, Banten province.

He was arrested after a video featuring a conversation involving him and a taxi driver went viral on social media.

In the video, Rev. Moses is heard quoting the Quran on marriage and claiming that the Prophet Muhammad was inconsistent with his teachings. He is also heard asking the taxi driver to convert to Christianity.

"We are still questioning him and witnesses and gathering evidence," Ariwibawa Anggakusuma, a spokesman for the police cybercrime unit, told ucanews.com on Dec. 12.

"He could face more than five years imprisonment," he said.

What Rev. Moses said in the video hurt the feelings of Muslims. Worse, it could ruin interreligious harmony in the country, group member Pedri Kasman said.

As a Protestant pastor, Rev. Moses should be a role model to his followers, he added.

"We want police to conduct a fair legal process. This is important because we do not want Muslims to overreact in this case," he said.

Theophilus Bela, a former chairman of the Jakarta Christian Communication Forum, an ecumenical group dealing with issues faced by Christians, said the case was "the first one" involving a Christian cleric.

At least 106 people were prosecuted and convicted under blasphemy laws between 2005 and 2014.

The Protestant Church has provided Moses with a lawyer, according to Bela.

In a 2014 report, "Prosecuting Beliefs: Indonesia’s Blasphemy Laws," Amnesty International said the regulations are often used to target individuals who belong to minority religions, and particularly people who adhere to interpretations of Islam that deviate from the mainstream form of Islam in Indonesia.

At least 106 people were prosecuted and convicted under blasphemy laws between 2005 and 2014.