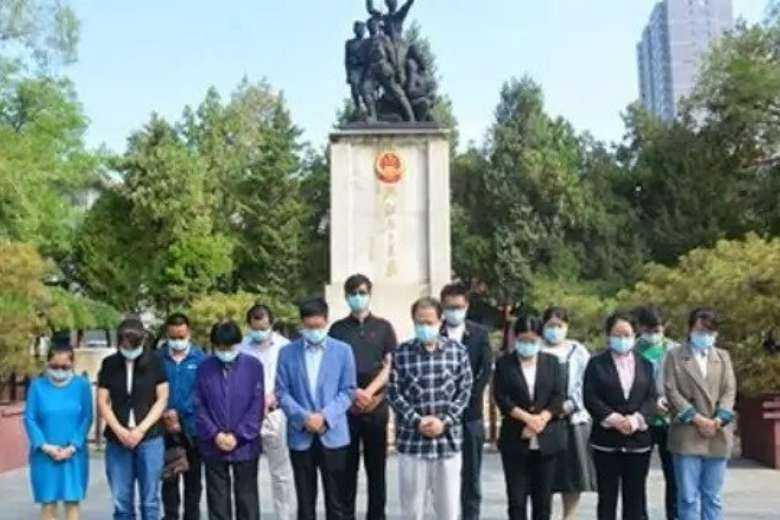 A group of Protestant Christians in northern China have prayed at a memorial shrine dedicated to communist martyrs following an order from the Chinese Communist Party (CCP).

The shrine, inaugurated in 1951, honors communist soldiers who died during the resistance war against Japanese occupation forces. The inscription on the shrine — “Long Live the Martyrs!” — was signed by Mao Zedong, the founding father of communist China.

The Chinese regime categorically bans Christians from honoring their own martyrs and praying to them.

The event in Taiyuan city is one of a series of Protestant activities ordered by the CCP to eulogize communist heroes on the 76th anniversary of China’s victory over Japan’s imperial forces.

Following the CCP’s 100th founding anniversary in July, a directive was sent to all Three-Self churches “to organize peace prayer worship activities to commemorate the 76th anniversary of the victory of the Chinese People’s War of Resistance against Japanese aggression and the world anti-fascist war.”

Without the sacrifices of the older generation of revolutionaries, there would be no stable and peaceful religious life today

“Local churches and congregations may, according to the actual local situation, carry out relevant peace prayer activities in a small and decentralized form, in line with the local requirements for prevention and control of the new Covid epidemic, to further promote the fine tradition of patriotism and love of religion and to demonstrate the good image of peace-loving Christianity in China,” the directive said.

In line with the order, members of the Theological Seminary in Fujian were invited to attend a celebration to pay tribute to communist martyrs and to pray for the intercession of “Jesus, the King of Peace” for the “peaceful reunification” of China.

The word “reunification” indirectly refers to Taiwan, which Beijing considers as a breakaway province and has threatened to annex militarily. Independent and democratic Taiwan has never officially declared independence. It maintains diplomatic ties with 14 countries and the Vatican, with the US as one of its main allies.

Meanwhile, Pastor Zhang said the Christians visited the shrine to learn how to “cultivate the love of the party, the country and socialism, and actively practice the core values ​​of socialism,” Bitter Winter reported.

The pastor disregarded the persecution of Christians and other religious groups in China and claimed Christians live a “happy and peaceful life,” adding that they should be grateful to the CCP for granting this favor to them “with the blood of countless revolutionary martyrs.”

“Without the sacrifices of the older generation of revolutionaries, there would be no stable and peaceful religious life today,” he said.

Five religions have legal status in officially atheist China — Protestantism, Catholicism, Buddhism, Islam and Taoism. The authorities have strictly controlled state-sanctioned religious groups and persecuted those adhering allegiance to unrecognized groups such as the Church of Almighty God and Falun Gong.

The 2018 regulations on religious affairs have been strictly enforced to intensify the crackdown on religious groups, especially Christians. Since then, hundreds of churches and church-based charities including Catholic-run orphanages have been shut down on allegations of operating illegally or violating rules by “indoctrinating people with religion.”

Another oppressive policy, Sinicization, aims to impose strict rules on societies and institutions based on the core values of socialism, autonomy and supporting the leadership of the CCP.