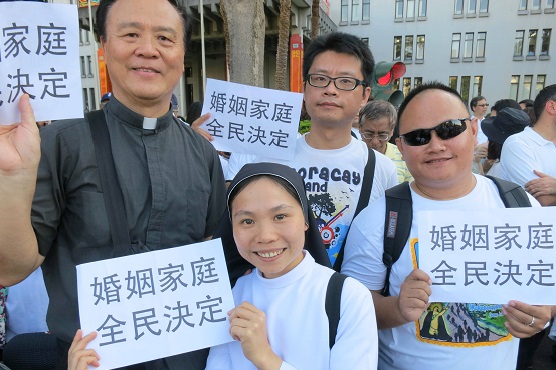 A nun, priest and lay Catholics holding cards protesting the same-sex marriage bill at a rally in Taiwan on Nov. 13. (Photo supplied)

Taiwanese lawmakers have agreed to suspend a second reading of a controversial same-sex marriage bill after 20,000 Christians protested in front of Taiwan's legislature on Nov. 17 in what one Catholic official called an unprecedented atmosphere of anger.

In the face of the protest, Yu Mei-nu, a lawmaker from the ruling Democratic Progressive Party who put forward the bill, said that legislators agreed to hold two public hearings in the coming weeks before further debates in the hope of avoiding further antagonism.

The protesters — organized by "Taiwan Family," an amalgamation of different pressure groups — are demanding 30 public hearings and a referendum.

After learning of the reading's suspension they said a prayer and left the legislature. It was their second rally since Nov. 13 after the first reading of the bill on Nov. 8 that allows LGBT people to marry and adopt children.

The protesters were particularly angry that some lawmakers tried to push through such a law that would overturn traditional culture in less than two weeks without thorough discussion.

"It was the first time since I was baptized 60 years ago that I saw Christians in Taiwan so angry. It shows that we all feel it is very important to defend our family values," Joseph Li, president of the National Council of the Lay Apostolate in Taiwan, told ucanews.com. Christian pastors were among the 20,000 protesters outside Taiwan's legislature building on Nov. 17 to oppose the same-sex marriage bill. (ucanews.com photo)

The church has motivated Catholics to join the protest and put pressure on lawmakers.

Taipei Archdiocese sent two letters out to parishioners, asking them to "stuff the mail box of" President Tsai Ing-wen who reportedly told some lawmakers that "she never heard any opposition against same-sex marriage from the church."

Father Otfried Chan, secretary general of the bishops' conference in Taiwan, has so far submitted more than 10,000 appeals to the president's office.

"A human being is born from the union of a man and a woman. The bodily structures of men and women are different. Can this be said to be discrimination?" Father Chan said, adding that lawmakers could amend individual laws to protect LGBT people instead of overturning current family law.

The lawmakers and gay people are also "victims" deceived by an "ideology of gender equality," the priest said.

Li, of the lay apostolate council, said that he hoped that Taiwan's Catholic vice president Philip Chen Chien-jen would join the opposition to the bill. "His view is the same as ours," said Li.

During the presidential election campaign, Chen told the press: "I also believe that gay people have the right to pursue happiness and we should respect that right. But since same-sex marriage involves a change in society's system, it needs a more in-depth discussion before a decision can be made."

Six religious figures, including Buddhists and Protestants, have however started a campaign in support of same-sex marriage, citing the separation of state and religion.

Their campaign has collected signatures from more than 1,300 individuals and 28 organizations, including Catholics as of Nov. 18.

They called for an attitude of "tolerance, justice and freedom" towards marriage and family and for pluralistic interpretations of scriptures on sexual orientation.

If Taiwan does pass the bill, it will become the first country in Asia to allow same-sex marriage.