Protest over corruption, inflation in Mongolia 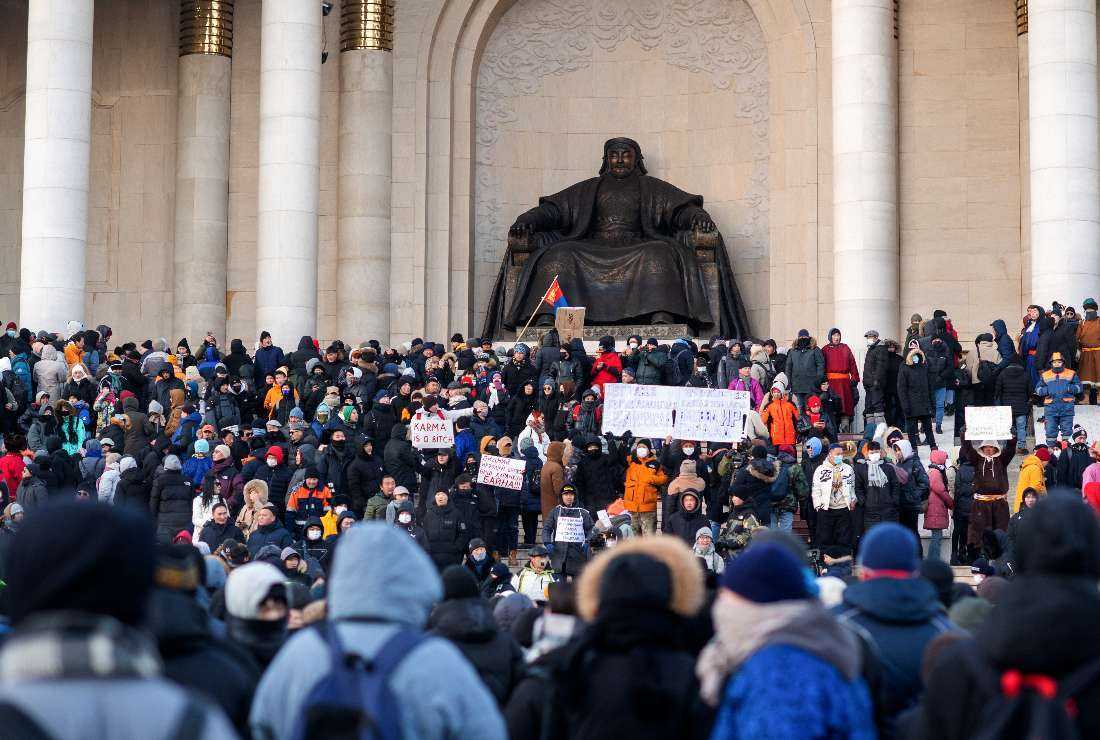 People gather to protest alleged corruption in coal industry and soaring inflation at Sukhbaatar Square in Ulaanbaatar, the capital of Mongolia on Dec. 5. (Photo: AFP)

Thousands have braved freezing temperatures in Mongolia's capital to protest alleged corruption in the country's coal industry and soaring inflation.

Protesters, many of them young people, rallied in Ulaanbaatar's Sukhbaatar Square -- home to the Government Palace -- in minus 21 degrees Celsius (minus six degrees Fahrenheit) on Monday, demanding "justice" against corrupt officials and for the country's parliament to be dismissed.

"Help us our country is collapsing," read one protester's sign.

Two herders told AFP they had travelled to the capital to join the protests.

"Basically doing nothing is not right. I think it is right that young people are angry," Enkh Amidral, a father of three, told AFP, saying he wanted the government to "punish the thieves".

"But they aren't doing anything, taking our money, filling their own bellies," she added.

Police urged the crowds to disperse by 9 pm local time (1300 GMT) as the mood turned tense and scuffles broke out with demonstrators.

Protesters are frustrated with the country's ailing economy, with inflation soaring to 15.2 percent in the wake of Russia's invasion of Ukraine.

But public outrage has also been stoked by whistleblower claims that a so-called "coal faction" of lawmakers with ties to the industry has stolen billions of dollars worth of the sedimentary rock.

In mid-November, Mongolia's anti-corruption authority announced that over 30 officials -- including the CEO of the state-owned coal mining company Erdenes Tavan Tolgoi -- were under investigation for embezzlement.

The firm controls the Erdenes Tavan Tolgoi deposits, which contain 7.5 billion tons of coking coal -- an essential ingredient in the steel-making process -- and represent a key component of Mongolia's state budget revenue. It is yet to comment on the allegations.

The implicated lawmakers are alleged to have leveraged their ownership of coal mines and transportation companies that move the fossil fuel across the border into China to make illegal profits.

"6.4 million tons coal is not registered by Mongolian customs officials but recorded by Chinese customs, since 2013," Dorjhand Togmid, an MP, told a press conference at the parliament in November.

Whistleblowers have also alleged that corrupt customs officials did not register coal-loaded trucks as importing goods, but instead as regular passenger vehicles, when they crossed the border to China.

Mongolia sends 86 percent of its exports to China, with coal accounting for more than half the total, and is upgrading its infrastructure in the hopes of selling even more to its southern neighbour.

Mining makes up a quarter of Mongolia's gross domestic product.

Monday's rally came a day after several hundred protesters gathered in the capital, the US embassy in Ulaanbaatar said.

Protesters then attempted to march on Ikh Tenger -- the official residence of the President and Prime Minister -- "where they were stopped by a police barricade," it added.

The landlocked country, wedged between China and Russia, has struggled with political instability since it became a democracy. Its first constitution was passed in 1992 after decades of communist rule.

Incumbent President Khurelsukh Ukhnaa was forced to resign as Prime Minister last year after protests and public outrage over the treatment of a Covid-19 patient and her newborn baby.

He was then elected head of state with nearly 70 percent of the vote just months later.