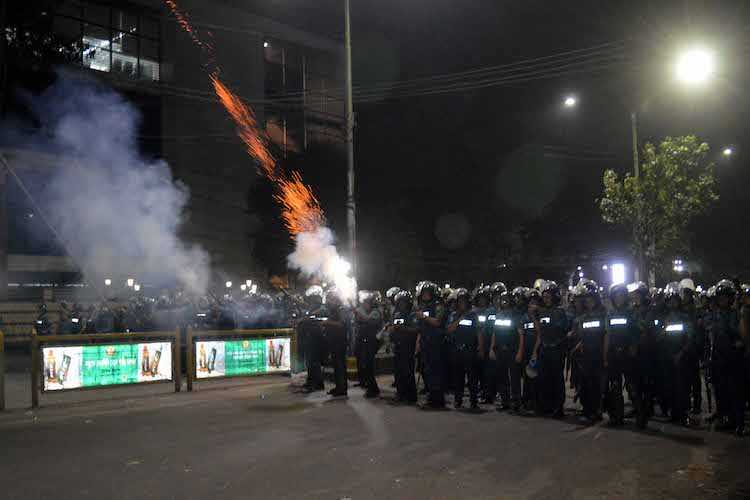 Protesters took over Shahbag Crossing, a major intersection, on April 8 to press home their demands. Similar large and small protests were held across the country.

Protesters condemned police actions and continued to demonstrate on April 9. Protest leaders also threatened to block major highways and all education institutions in the country if their demands are not met.

For more than a month, students have been demanding the government review the entry system and reduce civil service quotas, which are loaded in favor of various groups including descendants of the freedom fighters who fought for Bangladesh's independence from Pakistan in 1971.

Protesters have urged the government to reduce the overall quota to 10-20 percent to help more deserving applicants.

"No civilized country can accept a 56 percent quota for only 5 percent of people and 44 percent for 95 percent. This is absolutely discriminatory and should be changed. We are not against the quota system, but we want fair reform and we believe it should not be more than 10 percent," Hasan Ali, 24, a postgraduate student from Dhaka University, told ucanews.com

"The protesters demands are logical and the police attack on their peaceful rally was unacceptable and illogical. The quota system is unfair and it must be reviewed and reformed to make it up to date. It won't be possible to reduce the quota to 10 percent overnight, but it can be gradually decreased year after year," Nokrek told ucanews.com.

Amid protests and violence, Prime Minister Sheikh Hasina asked senior Awami League party leaders to sit with protesters to find an "amicable solution" to the crisis.

"We realize students are aggrieved over the quota system that has continued for a long time. The government and prime minister are aware of the situation, so we would like to sit with them to listen to what they say and find a solution," said Jahangir Kabir Nanak, a senior Awami League leader.