How far has the island nation come since the civil war ended seven years ago? 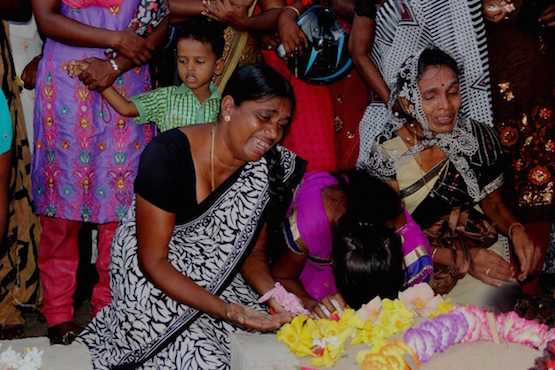 Sri Lankan ethnic Tamil women cry at the graves of relatives who died in fighting in Mullivaikkal, the scene of the worst atrocities committed during the last phase of country's civil war in 2009. (ucanews photo by Quintus Colombage)

The seventh anniversary of the end of Sri Lanka's civil war falls on May 18, a date that is likely to once again polarize the island's society along ethnic lines.

Most Sinhalese are expected to see May 18 as a day for celebration. Many Tamils, especially in the North and East, are instead likely to see it as a day of mourning for their loved ones killed or disappeared and to recall the suffering they underwent during the decades-long war. Tamil politicians and Catholic priests in the North and East are planning commemorations despite the likelihood of government crackdowns, as we saw last year and before.

Last week, I visited a cemetery for former Tamil militants that was bulldozed by the government after the end of the war. An army camp has now been built over it. The loved ones of those whose remains were there have no place to grieve, lay flowers, light a candle or say a prayer.

The Tamil majority north is now dotted with monuments to the Sinhalese dominated military. The ability to remember loved ones without intimidation and reprisals, and remembering without glorifying abuses of human rights violations, is a major challenge, especially for Christians, who are both Sinhalese and Tamils.

Even after the President Maithripala Sirisena government came to power in early 2015, there have been restrictions, attacks and intimidation of activists and journalists. However, there has been more space for free expression and assembly now than under the previous government led by Mahinda Rajapaksa.

Divisions in society and civil society are also prevalent in the Catholic Church, along ethnic and ideological lines. A few church leaders, both Tamil and Sinhalese, have given leadership, support and protective presence to survivors, victim's families and activists. Their leadership and presence has been visible most recently in protests against the Port City project (a planned city located offshore in Colombo) and initiatives by families of disappeared persons and against militarization.

They have also been involved in remembrance services for those killed and engaging with the government, foreign governments and the UN on human rights issues. These efforts must continue, especially struggles that bring together Sinhalese and Tamil Christians.

But even the most activist clergy and lay Christians must be careful about compartmentalizing struggles for truth and justice.

After years of campaigning and legal action, some of the land illegally occupied by the military has been released. But the military continues to occupy many villages and large swathes of land in the North and East.

The government has made a commendable commitment to build 65,000 houses for the war affected. But it's planning to pay an unprecedented 2.1 million rupees ($US 14,500) per house to a foreign steel manufacturer with no housing experience. Most post war houses in the North and East of Sri Lanka have been built for less than one third of that price.

Housing experts, engineers, architects and activists have pointed out that steel houses will not last as long as traditional brick ones. Such structures are not well ventilated, nor are they easy to repair or to expand. They likewise lack facilities to engage in traditional cooking which uses low cost and easily available firewood. Steel housing will not help stimulate the local economy because there is no use of local resources or labor.

The discovery of explosives and suicide jackets near Jaffna in March has led to intensified surveillance and questioning of Tamils in that region.

At least 30 people have been arrested under the Prevention of Terrorism Act. Some have been detained without being told why they are being held.

The Prevention of Terrorism Act is a draconian law that enables the minister of defense or the police to detain people without checks and balances. It has allowed widespread torture and disappearances to occur. Persons detained under this law are languishing in prisons without being judged either guilty or innocent.

An investigation against myself under this law by the Terrorism Investigation Division has continued for more than two years despite appeals by my lawyers. Others, who were detained under the law and subsequently released, are still being subjected to investigation and harassment such as being re-arrested, forced to regularly report to police stations and not being allowed to travel overseas.

A dreaded "white van" — a symbol of abductions of the previous regime — was used to abduct a Tamil man from Jaffna last month, and he was later found in police custody.

Several other disappearances were reported from the North and East last month, while the government was going about creating an Office of Missing Persons. Despite promises of consultations before it is set up, how this office will operate had been shrouded in secrecy for eight months. Its first outline was presented last week and it has been found lacking in many ways, especially in regards to provision of information to families of victims, reparations and issuance of certificates of absence. The right of families to pursue criminal accountability has been compromised because the office's tracing investigations have been isolated from prosecutorial investigations.

The government has also not shared it's ideas in relation to three other transitional justice mechanisms that it committed itself to establishing as a part of a UN Human Rights Council resolution that it co-sponsored last October.

Unfortunately President Maithripala Sirisena has publicly backtracked from a commitment to have foreign judges, prosecutors and lawyers in a special judicial mechanism for wartime abuses. Meanwhile some survivors, victims' families and human rights activists including Catholic clergy insist in foreign participation, citing a lack of confidence in the Sri Lankan justice system.

Although several military personnel have been convicted and some others arrested for human rights abuses, the lack of progress in thousands of other cases only reinforces calls for international involvement for justice.

Which way for Sri Lankan society?

A consultation process towards a new constitution drew a large number of public representations, but the next steps are not clear, particularly in finding political solutions to the grievances of the country's ethnic minorities.

The new government's economic and development policies are focusing on trade, investment and mega development projects, which privilege the rich and marginalize the poor. A high profile example is the controversial Port City project, which targets the super-rich.

Despite a public pre-election commitment to scrap the project by Prime Minister Ranil Wickremesinghe the project is ongoing, as are protests and pending court cases that highlight disastrous consequences for the livelihood of fisherfolk and for the environment.

Serious concerns have likewise been expressed about the Economic and Technical Cooperation Agreement with India and the Megapolis development plan for the capital and surrounding areas.

Activists have also pointed out that very little attention is being given to economic justice during discourse about transitional justice. Attempts by the military and corporates to dominate the economy in the war-ravaged North have led to traditional livelihoods such as agriculture and fishing being sidelined and the non-stimulation of the local economy. There has been an increase in widespread debt, unemployment and poor working conditions, especially in the informal sectors.

The new government's more open approach to civil society has led to many international transitional justice experts coming to Sri Lanka and local activists becoming part of government initiatives. These have led to many workshops in expensive hotels during a time of serious economic crisis.

Some activists and intellectuals appear to be disconnected to ground realities and oblivious to, or seek to override people's voices. Some ignore day-to-day problems of the people; such as dealing with loved ones who disappeared, are detained, sexual abuse, military occupied land and economic hardships. They instead prioritize prosecutions for war crimes and crimes against humanity, which doesn't seem to be a priority for most survivors and families of victims.

Other activists seem to focus almost exclusively on economic and social issues and appear reluctant to recognize and even undermine the courageous and determined struggles of survivors and victim's families for truth and justice.

Pre-war rights issues such as landlessness, sexual and gender-based violence and discrimination, caste, rights of workers, including those working on tea estates, still need to be addressed.

Overall, the key challenges for the country's reconciliation and sustainable development are how we address civil and political rights and economic, social cultural rights in a holistic manner. And do so in a way that does not ignore war survivors, victims' families and the poor, who yearn for truth, reparations, criminal accountability and economic justice.

There should be no sweeping under the carpet the violence and abuses committed by state and non-state armed groups and within society.

Ruki Fernando is a human rights activist and a member of the Justice, Peace and Integrity of Creation Commission of the Conference of Major Religious Superiors in Sri Lanka. He is also a member of the Asia-Pacific chaplaincy team of the International Movement of Catholic Students.