Project's opponents vow to fight on for their homes and livelihoods

A protest to the finish at a Myanmar mine 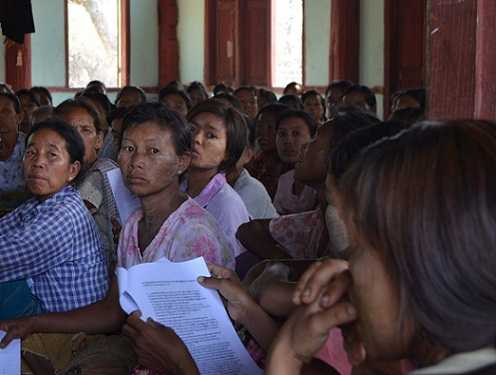 Seltel villagers discuss the commission report on the copper mine project

A red flag flutters over the entrance to Seltel in Monwya Township where people have established makeshift guard posts to prevent outsiders from “invading” their village.

The villagers from Myanmar’s Sagaing region exude an air of battle alertness and look upon strangers with suspicion. Their purpose is to save their village of 150 households from a controversial copper mine project.

Seltel and three other villages would be relocated if the US$1 billion expansion project, a joint venture between China and Myanmar, goes ahead.

“We will fight for our village at the risk of our lives,” said Ba Htoo, one of the villagers.

“We demand the project be completely scrapped. We will not accept any other terms or conditions.”

Clashes broke out between protesters and police here in November prompting authorities to suspend the project, but further violence is likely if the project is allowed to continue, villagers say.

Their anger was stoked even more last week when a commission headed by opposition leader Aung San Suu Kyi recommended the project's continuation.

The commission concluded the project needs to continue to maintain good relations with China, the principal investor in the joint venture with a Myanmar army-owned corporation.

The commission is also wary of angering the powerful military, especially at a time of national reconciliation and democratic reforms.

When Suu Kyi went to the nearby village of Tone Ywar last week to explain to residents why the project should continue, she was shouted down by angry villagers who told her they were not interested in compensation as that would not replace their lost village, land and livelihoods.

The scene was in stark contrast to the adoring supporters who greeted her following her release from years of house arrest under the Myanmar junta.

“We expected Daw Aung San Suu Kyi to support the cancellation of the project. But now we are all broken hearted,” said Hla Htay, a 30-year-old woman who confronted Suu Kyi.

She said she would never hate the country’s democracy icon, but she could no longer support her.

Villagers are also irked that no action has been taken against officials involved in the violent crackdown in November, in which Buddhist monks were injured by phosphorous grenades, and that exclusion zones have been set up around their village under an emergency law.

Since last Saturday, several protest camps including one in Seltel have been temporarily shut down and the authorities have started providing compensation to people in one of the affected villages.

Villagers in Kankone say they have received about $3,000 per hectare of land even though this is far below the market price of $12,000.

Two villages, namely Tone Ywar and Seltel, with a combined population of 2,500, are to be completely destroyed under the project so villagers there have refused compensation and will resume protests against the mine.

U Pyinyasarmi, a 59-year-old Buddhist monk in Seltel, said his 500-year old monastery is earmarked for demolition, which has given villagers an extra incentive to fight for their homes and way of life.

“I feel very sad about the situation. Residents have turned the village into sort of a fort to prevent anyone from destroying their homes and the monastery. This will result in bloodshed,” he said.

He also lamented the way the villagers were portrayed as “poor, uneducated, and brutish” people by Myanmar social media when they heckled Suu Kyi last week.

“They exercised their right of freedom of expression to voice their grievances. When they exchanged arguments with Daw Suu, they were wrongly portrayed,” U Pyinyasarmi said.

“We have lost confidence in the reforms of our country. I can foresee nothing but violence if the project continues. No project can be successful without local cooperation and support.”