Some churches in Taiwan are self-censoring in order to be allowed to operate in mainland China, a symposium has been told.

This comes in the wake of the Chinese Communist Party’s 19thCongress, which cemented tighter controls over religious believers.

Chen Wenshan, Assistant Professor of Taiwan Yushan Theological College and Seminary, at a Nov. 14 Global Taiwan Institute symposium, referred to churches in Taiwan that practiced "self-restraint" on sensitive subjects in order to be able to preach in China

She also noted that churches in Hong Kong are being adversely affected by stricter Chinese controls over religion.

Some professors in Hong Kong theological seminaries also now chose "silence" over talking about controversial issues, she told ‘Voice of America’ radio after the symposium.

Chen noted that the Taiwanese government is considering setting up an investigation into funding sources of some churches in Taiwan that had been able to organize "big events."

The implication was that Mainland China could be the ultimate source of such covert financial support.

Chen also noted that the previous longtime Kuomintang rulers of Taiwan kept churches under surveillance and monitored their publications.

She noted that some Christian NGO workers in mainland China would only express their "real thoughts" in private or when visiting Hong Kong.

Beatrice Leung Kuk-fen, a visiting research professor at Taiwan Wenzao Ursuline University of Languages, said the situation in Hong Kong and Macau was far more serious than in Taiwan. China strives to patch up relations with Taiwan 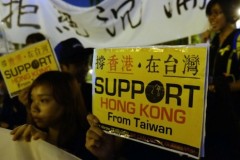 She said that in Taiwan scholars were not afraid of direct mainland persecution, but they were careful on subjects such as cross-Strait relations in order to avoid their research being politicized.