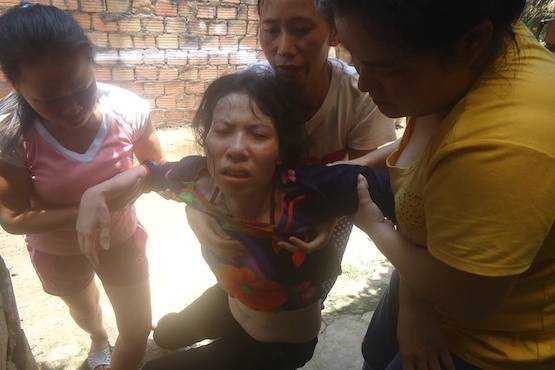 An injured Tran Thi Hong is taken to her home by neighbors after police arrested and allegedly tortured her on April 14. (Photo courtesy of Nguyen Ngoc Lua)

International human rights groups are calling on the Vietnamese government to conduct an extensive probe into the alleged torture of a Christian activist by police in mid-April.

"We, the undersigned organizations and individuals, call on the Socialist Republic of Vietnam to carry out a prompt, impartial, independent and effective investigation into allegations that Mrs. Tran Thi Hong was tortured by the authorities of Hoa Lu Ward of Pleiku City in Gia Lai Province, while in custody, bring any identified perpetrators to justice, and provide reparations to her," they said in a joint statement.

Among the groups to sign the statement were Amnesty International, Christian Solidarity Worldwide, Civil Rights Defenders and the Committee for Religious Freedom in Vietnam.

The statement was initiated by the Vietnamese Women for Human Rights, a Vietnam-based rights group that works for ending of violence and torture against dissidents and activists.

They said Hong, a member of Vietnamese Women for Human Rights, was abducted from her home on April 14 and brought to the office of the People's Committee of Hoa Lu Ward, where she was interrogated and severely beaten and tortured for three hours by plainclothes police. They attempted to extract information about her late March meeting with a U.S. delegation led by David Saperstein, ambassador at-large on International Religious Freedom.

"So far my whole body hurts and it has still been too painful to work. I am still taking medicine," Hong told ucanews.com.

She said with a weak voice that she refused to reveal to police what she told the U.S. delegates. She was picked up by police and returned to her home while she was on the way to meet the delegation in Pleiku City on March 30. The delegation managed to visit her home, which was surrounded by police.

"They [police] have beaten me brutally like that many times for years. They will continue to persecute me until they get some information from me," she said. "But I will not work with them unless they officially invite me as a citizen."

Hong said government authorities try to isolate her from other people, especially foreign diplomats, aiming to prevent her from providing concrete evidence of violations of religious freedom made by the government.

The mother of four said she recorded 30 cases of ethnic Christians who have been unfairly imprisoned for their religious practices. Some of them died of torture in prison, she said.

Her husband, Lutheran Pastor Nguyen Cong Chinh, was sentenced to 11 years in jail in 2012 for conducting campaigns against the communist government and "undermining national unity."

In their statement, the signatories demanded the government "immediately and unconditionally free Pastor Chinh and show respect for international human rights law and standards."

They said civil society organizations and human rights advocates in Southeast Asia and around the world continue to follow the situation of Hong’s family with deep concern.