Non-Christian tribal people stand in front of a Protestant church in Jharkhand state that they converted into a community hall for people following their Sarna region. (Photo supplied)

Pro-Hindu tribal people have removed a cross from a Protestant church and converted the building into their community hall in India's Jharkhand state in a move that Christian leaders believe is linked to upcoming elections.

Some 50 tribal people took down the cross from the Vishwa Vani (voice of the world) church in Khadnga village, 25 kilometers from state capital Ranchi, on Oct. 20. They also repainted the name as Sarna Bhavan — the house of those following the traditional tribal Sarna religion. They also held a purification ceremony and prayers at the church.

"We lodged a complaint with the police on Oct. 24 after our efforts to amicably settle the issue failed," said Pastor Emmanuel Kujur, coordinator of the Protestant group in the state.

He said tribal people in the village captured the church on grounds that it was built on tribal land. They claimed to have a government order to reclaim the land and the building but failed to produce the document, he said.

Pastor Kujur admitted there was a dispute over the land. The church was built on land donated by a tribal Christian. He and his brothers had a dispute over their property and a local magistrate ruled the land belonged to the government.

"But that does not give anyone the right to capture the church. The dispute continues between the brothers. Until it is settled, how can someone take it over?" he asked.

Megha Oraon, who heads Jharkhand Adivasi Sarna Vikas Samiti, a forum that works for the development of Sarna people, said it is determined "to evacuate all the encroachments from our tribal land."

He and other Sarna leaders like Sundeep Oraon say Christian missionaries have captured thousands of acres of tribal land in violation of state law. The missioners built churches, schools, hospitals, orphanages and other establishments to convert people to Christianity, they claim.

Sundeep noted that religious conversion through allurement or force is an offense punishable by  jail and a fine under state law. 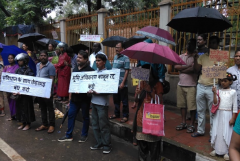 He called on the state government, run by the pro-Hindu Bharatiya Janata Party (BJP), to constitute a special team to investigate the landholdings of Christians churches and take back all illegal possessions.

Catholic Bishop Vincent Barwa of Simdega sees a ploy in the takeover of the Protestant church. "This is part of the hidden agenda of the BJP to divide tribal people as Christian and non-Christian ahead of elections" in the state and national parliament early next year, he said.

Bishop Barwa, who heads the Indian bishops' commission for indigenous people, told ucanews.com that taking over the church is a subtle warning to all Christians in the state. It shows what is in store for Christians if the BJP comes back to power in the state and in New Delhi, the bishop said.

Christian leaders have been complaining that anti-Christian violence has increased since the BJP came to power five years ago in the state and in New Delhi after projecting themselves as champions of Hindu interests. Groups supporting the BJP took the party's victory as a mandate to step up action against religious minorities in their quest to make India a Hindu-only nation.

"What is more worrying is that people are allowed to take the law into their hands as happened in this case," Bishop Barwa said.

He said the BJP and other Hindu groups find "a danger in tribal people getting educated and becoming assertive for their rights. That's why they target attack Christians and their institutions."

The BJP also fears election defeat if tribal people stand together and vote en masse as people are generally unhappy because of the non-performance of the government at state and national level, he said.

The BJP is trying to use Sarna tribal people against tribal Christians, said Prabhakar Tirkey, president of Rashtriya Isai Mahasangh, an ecumenical national forum of Christians.

Tirkey told ucanews.com that the BJP wants to tarnish the image of the church, which is respected among tribal people for dedicated services. "It is political maneuvering ahead of the polls. The party has nothing to highlight as its achievement. Therefore, it is dividing people for votes," he said.

Pastor Kujur, who heads 60 pastors in the state, sees the BJP's political agenda in the incident. He believes the party sent its loyal supporters to destroy the cross and take over the church to divide tribal people.

Jharkhand has close to 1 million Christians, almost all of them tribal people, in a population of 32 million. Its 4.3 percent Christian population is almost double that of the national figure.

Jharkhand was created in 2000 from tribal-dominated areas of Bihar state.