Recent victories have set the tone for the 2019 general elections The victory in four of the five states that went to polls recently will help the BJP consolidate its political position across India and push vigorously to promote a Hindu hegemony despite India's constitution allowing all citizens the freedom to profess and propagate any religion.

One of the states the BJP won was Uttar Pradesh, India's most populous state. There it won 324 of 403 seats, when results were last declared March 13. Some 80 percent of Uttar Pradesh's 200 million people are Hindus.

The BJP already has a majority in the lower house of parliament and since 2014 the party has run the federal government. However, it lacks a majority in the upper house but recent electoral wins will help it in getting close to a majority, crucial for passage of bills in parliament. It is those elected to state legislatures who send members to the 250-seat upper house.

"This will help toward the completion of the Hindu agenda and that certain mindset in the country that believes that the minority communities are not good for the country," A.C. Michael, a lay Catholic leader in Delhi Archdiocese told ucanews.com.

Religious minorities need to be more cautious as the recent victories have set the tone for the 2019 general elections, Michael said.

The BJP and pro-Hindu groups attached to it have often been accused of discrimination and violence against religious minorities such as Christians and Muslims. 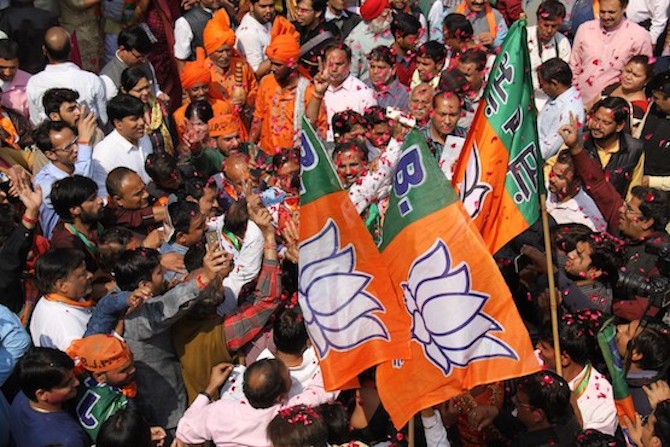 "The election results have worsened the situation" of Christians in the country, according to Joseph Dias, founder of the Catholic Secular Forum, a Christian rights group in Mumbai, India's financial capital and where Bombay Archdiocese, the country's most populous diocese is based.

Many Christian institutions are already under attack by the government stopping foreign funding to them, Dias told ucanews.com.

According to a persecution report released by Dais' group in February, 10 Christians were killed and over 500 clergy and community leaders targeted across the country in 2016 due to their faith or on allegations of converting people to Christianity. Some 12,000 people experienced persecution during the same year, it said.

In his victory speech, Indian Prime Minister Narendra Modi on March 12 said his Bharatiya Janata Party would take everyone along as "in a democracy governments are formed with a majority but run with consensus."

Besides Uttar Pradesh, elections were also held in the Christian strong-hold state of Goa, and in the states of Manipur, Uttrakhand and Punjab.

In Goa and Manipur the rival secular Congress party emerged as the single largest party but the BJP has staked its claim to form governments in both of these states with the help of regional parties. The only place the BJP lost was in Punjab where it could on its own win only three of the 117 seats, with the Congress party winning most of the seats.