The Federal Election Commission in early October announced the poll dates for Christian-dominated Mizoram in the northeast, the youngest Telangana state in the Deccan plateau, and the three BJP-ruled states of Madhya Pradesh, Chhattisgarh, and Rajasthan.

The BJP's rival, the Congress party, which ruled India for most of the years since the British departed in 1947, is determined to win the elections to boost its cadres and seize once more the power it enjoyed until five years ago, when the BJP unseated it from New Delhi.

Both the BJP and Congress face serious hurdles, particularly in the three BJP-ruled northern states, where the BJP took the reins on a Hindu nationalist-wave, riding on the planks of employment for youth and development for farmers.

In Rajasthan, the BJP government under Chief Minister Vasundhara Raje, scion of a princely family, faces criticism for not delivering on its promises of employment and development.

In Madhya Pradesh and Chhattisgarh, where the party was in power for 15 years, it faces a mood of revolt.

"Modi's government in Delhi is also unpopular, so we have an advantage there. We can also make use of this [backlash against the incumbent government] in the three crucial states of Rajasthan, Madhya Pradesh and Chhattisgarh," senior Congress leader Mohan Prakash told ucanews.com.

Winning state elections would lay a foundation to ouster Modi from the helm of important affairs, say his critics, which include some Christian leaders, socialist veterans, and restive youth who formed the BJP's core voters in the 2014 national elections.

The BJP is "working overtime trying to win over voters, including the [socially poor] Dalits. In Mizoram, they have strong financial backing to woo Christians," said Rajasthan Congress general-secretary Giriraj Gar.

In Chhattisgarh, which has faced several anti-Christian incidents, Christian leaders say they are unhappy with the BJP government in the state and in New Delhi. 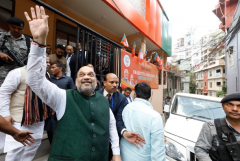 "We Christians have faced problems. The anti-conversion law is anti-democratic. Christian funding through foreign agencies has been curtailed. Normal prayers are often targeted as conversion gatherings," said Michael Rudra, a Christian businessman in Raipur.

Alexander Paul, a Christian leader based in Bilaspur town in the same state said the anti-conversion law "particularly makes things difficult. Even honest social work by Christians is being misinterpreted as actions aimed at converting people," he said.

Christians in Chhattisgarh, who form barely two percent of the state's 25 million people, are spread across the state but they are practically invisible in the political arena.

Despite their leaders' strong views against the BJP, their issues fail to surface in political discussions.

Opposition to the incumbent government notwithstanding, the BJP has certain advantages in Chhattisgarh as Congress has no strong leadership or network, Congress sympathizers say.

"It lacks the appetite for victory. You can't win an election simply by banking on the mistakes of the BJP," said a Congress worker in Rajnandgaon, a constituency currently represented by BJP Chief Minister Raman Singh.

Some voters may be looking for change from the BJP, said Bilaspur-based trader Arun Jain.

But there "is also a viable alternative to the BJP, at least in Chhattisgarh and Madhya Pradesh," he added.

In Rajasthan, BJP members believe they can retain power.

"There's no debate about this. The country is bent on having Narendra Modi in power for another five-year term … that includes Rajasthan," said Bimal Kataria, who handles media affairs for the BJP in the state.

"So the people of Rajasthan will not [disrupt the] synchronization between the state government and the central government headed by Modi," he said.

The BJP's biggest challenge is seen as coming from upper-caste Hindus, its traditional support base in northern India, especially in Rajasthan and Madhya Pradesh.

However the group has become alienated after Modi's government supported a law they see as being biased in favor or lower-caste people.

The law stipulates that people of any caste can be arrested on the spot if someone from a lower caste issues a complaint against them, without requiring a preliminary probe.

The Modi government has refused to alter the law despite the Supreme Court noting that it could be abused at the expense of people from higher castes.

"This 'black law' has to go," said Anil Sharma, regional president of Samta Andolan Samity in Kota, which works for upper-caste interests.

The group conducted a protest in front of the office of the BJP's sitting legislator, Prahlad Gunjal, in Kota recently.

Echoing similar sentiments, BJP supporter Ramesh Singh said he voted for Modi in 2014. But the government "should not have given in to the politics of blackmail based on caste," he said.

He believes Modi supported the law to avoid being projected as anti-Dalit.

"We are unhappy," Gunjal said. "We want the law withdrawn."

Farmers, who make up 70 percent of the local population in many states, have also been on the warpath due to their anger at certain government polices, which they said have lowered the prices of their agricultural produce.

They have accused the government of backpedaling after promising earlier to help ease their debts and increase price support for their wares.

But Singh said Congress "should not be overconfident."

The euphoria seen among Congress members in Rajasthan "has to convert into votes," he added.

Christians make up a negligible minority in Rajasthan and political parities pay little heed to the community, which numbers fewer than 100,000 among a population of 68 million people, 88 percent of whom are Hindus.

But the situation is quite different in Mizoram, where Christians represent 87 percent of the population.

The pro-Hindu BJP forms part of the government in two more Christian-majority states — Nagaland and Meghalaya — and it is determined to win at least some of the 40 seats in their respective legislatures.

"We are eyeing a tectonic shift in Indian politics, even more so in Mizoram where people will rise above notions like religious identity" and endorse Modi's vision of "will all, development for all," said local BJP leader Virendra Sachdeva.

The party has already fielded two former pastors among its candidates in Mizoram, with an eye on Christian votes.

In Telangana state, Christian groups have banded together in a bid to be included in the election manifestos of different political parties.

Their list of demands includes laws to protect Christians from violence and others aimed at giving financial assistance to people and institutions in need.

"Political parties have to take Christians seriously. They are a deciding factor in at least some pockets of the country," said Father Antony Raj Thumma, who coordinates the ecumenical forum of the Federation of Telugu Churches.

Officially, Christians only account for 1.8 percent of the state's 35 million people, but unofficially their numbers are more than double this, Father Thumma told ucanews.com.

Church leaders say that in Telangana, where regional parties hold sway, the situation remains fluid and there is a possibility the BJP will enter into some post-poll alliance to ensure it has a role to play in the government.