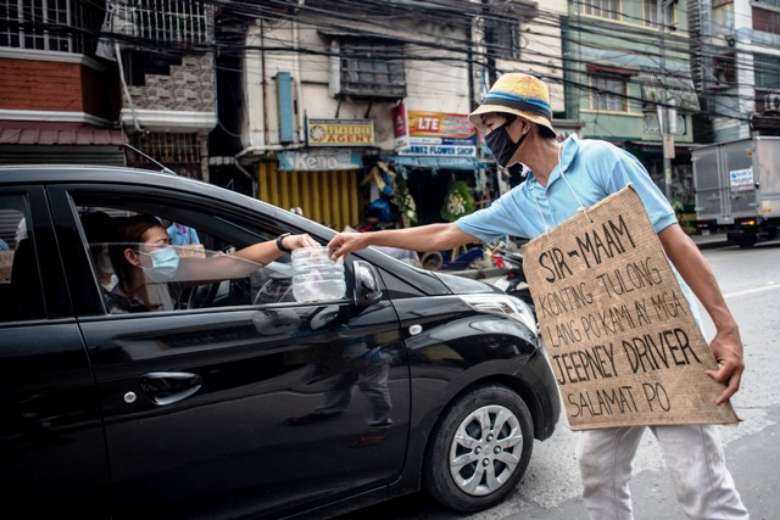 A jeepney driver receives alms from a motorist in Manila in August 2020 as the Philippine economy reeled from coronavirus lockdowns. (Photo: AFP)

This is the second part of an analysis of Christian attitudes to inequality. The first part can be seen here:

In several meetings of minds on the topic of social responsibility, I have often been asked whether I am against the legal acquisition of wealth or private ownership. Of course not, I answer back.

That private property is a necessary institution and that it is basic to normal human lifestyle are positions I’ve always held — and there are personal, moral, social and psychological reasons that can buttress such claims. I also hold that the promotion of the common good requires respect for the right to private property and its exercise.

However, from the Christian perspective, private ownership is not an absolute right, for it is a means and not an end in itself. Affluence is a natural personal right — yes, it is — but with corresponding social obligations.

Every crazy rich Asian is reminded that private wealth has a social dimension, a principle that is grounded on the universal destiny of the goods of the earth. It’s called the “creative original intention,” which means that God intends to give the goods and resources of the earth to every person.

It was the 13th-century Dominican theologian Thomas Aquinas who formulated the fundamental logic behind the subservience of private ownership to the common good.

The needs of the community condition the right to private property, which means that the common good or the public welfare should prevail over private ownership

Saint Thomas Aquinas insisted that “no one ought to live unbecomingly,” which may refer to a state of poverty that dehumanizes. But when necessity has been supplied and one's position fairly considered, it is a duty to give to those who have less in life out of the surplus of one’s affluence.

In short, no one is justified to own or keep for his exclusive use what he does not need. Catholic social teaching has a fundamental principle for that, which is the social dimension of private property that is grounded on the universal destiny of the goods of the earth.

From the Christian perspective, I say again that God intends to give the goods and resources of the earth to every person.

An example is the 1997 decision made by the banking authority in Zurich, where the Swiss Banking Commission agreed to waive the secrecy laws to permit the investigation of Switzerland’s dealings with the Nazis and the missing Jewish assets from the time of the Holocaust.

Regarded as a “spectacular breakthrough,” that historic decision was a cancellation of the once unassailable property right in an effort to recover stolen Jewish wealth during World War II that was transferred by the Nazis to their Swiss bank accounts.

“You are handing over to him what is his. For what has been given in common for the use of all, you have arrogated to yourself. The world is given to all and not only to the rich”

Mind you, the universal destiny of goods is such a radical Christian principle, for it means that all the material goods of the earth are not meant to be owned and used by a powerful few rich but, on the contrary, that all residents of this planet can equally own and use these goods in accordance with God’s original plan.

It boils down to this: the world and its resources are given to all, that a rich man’s gift to the poor, in the first place, does not belong to the rich, and the gift is actually the poor man’s property. This is what Saint Ambrose of Milan was saying all along, as quoted by one important doctrine of the Vatican Council II.

The venerable church leader of the third century issued a stern warning for the powerful few in their accumulation of wealth and in their disregard for the needs of the poor majority by saying: “You are handing over to him what is his. For what has been given in common for the use of all, you have arrogated to yourself. The world is given to all and not only to the rich.”

A Christian solution to poverty and inequality lies in the praxis of this fundamental principle, which can lead us to accept wholeheartedly the norm that wealth and private property have a social character with corresponding social obligations.

Then and only then, a super-rich guy with four luxury cars, a yacht, a helicopter, several exclusive apartments in New York, Dubai, Tokyo, and Hong Kong, and a private vacation house on Nihi Sumba island in Indonesia, would feel so ashamed as he watches the news that nearly three billion human beings live on less than five dollars a day.

Then, to oversimplify a future scenario, the rich stop getting richer and the poor poorer.

* Jose Mario Bautista Maximiano is the author of 'Global Business Ethics for Filipinos of the New Millennium’ (Anvil, 2001) and ‘Corporate Social Responsibility: Basic Principles and Best Practices’ (De La Salle University Press, 2004). The views expressed in this article are those of the author and do not necessarily reflect the official editorial position of UCA News.