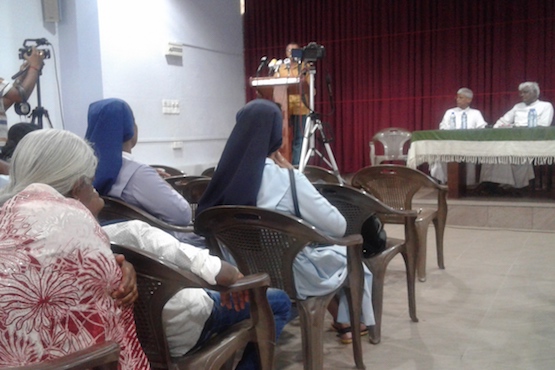 Father Terrence Fernando and Father Mariamuttu Sathievel launch their books at the Center for Society and Religion in Colombo on March 5. (ucanews.com photo)

Two Sri Lankan priests who chose to stay among war-affected Tamils have written books about their experiences and challenges.

Senior Catholic Priest Father Terrence Fernando and Anglican Father Mariamuttu Sathievel launched their books on March 5 at the Center for Society and Religion in Colombo.

Father Fernando, a Sinhalese, started a mission in Tamil areas with minimum facilities and great difficulties while living in Vavuniya in the north. He pleaded with church leaders and other leading figures to stand against war.

His book contains letters and articles about the suffering of people during the civil war from 1983 to 2009.

"What I have written in this book is not mere thoughts and essays but stories of the blood and tears of our Tamil brothers and sisters," said Father Fernando.

"We should accept and open up to this bitter truth and reality. Nobody can run away or escape being responsible for this grave crime saying 'we have nothing to do with it' or 'we don't know.'

"Please join me and accept the inviolable rights of the Tamils to live in their own land as a nation with freedom and dignity."

Mahinda Namal, editor of Kithusara newspaper and the Jesus Today website who addressed priests, nuns and rights activists at the launch, said the books reflected the suffering and struggles of marginalized people.

"Both priests don't leave their suffering people when they are needed," said Namal.