Opposition senatorial candidates for the Philippine election in May launch their campaign in an urban poor community in Manila. (Photo by Jire Carreon)

Several Catholic priests in the Philippines have unofficially thrown their support behind opposition candidates in upcoming national elections in May, despite warnings for them to remain neutral, according to a church official.

Father Edwin Gariguez, executive secretary of the social action secretariat of the Catholic bishops’ conference, said the priests are supporting candidates because of their "track record and what they stand for."

However, he said the members of the clergy have been warned against openly supporting candidates in public.
Donate to UCA News with a small contribution of your choice
"We agreed that they will not endorse [candidates] publicly," said Father Gariguez. "They will just whisper [their endorsement] to people they know because the Church, in principle, will never endorse a candidate," he added.Father Gariguez said the priests, many of whom are social action directors of various dioceses, have expressed support for opposition candidates despite them being not that popular."It's lamentable that those who win are often those who are popular, but not suited for the job," he said, adding that, "winnability should not be the basis for choosing a candidate."He said "platforms and a candidate’s qualities and track record" should be taken into consideration.In January, Catholic bishops released a pastoral statement recognizing the importance of this year's national elections."It is very crucial … that we elect public officials who are principled, courageous and who have the common good as their main concern and not their own political interests," said the bishops.
Related News 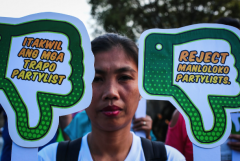 Thank you. You are now signed up to Daily newsletter
The Philippines will hold midterm elections on May 13 for 12 seats in the Senate, all seats in the House of Representatives, and for all provincial and local-level elected positions.

Church leaders urged lay groups to organize "discernment circles" to help the electorate know their candidates and choose those promoting the common good.