Despite leap in numbers of abandoned babies, Korean officials say it's illegal 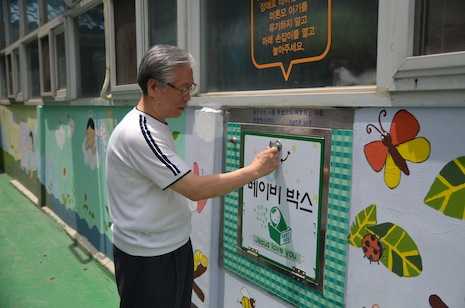 Rev Lee with his controversial, custom made baby box

Reverend Lee Jong-rak of Jusarang Community Church in the southern outskirts of Seoul will not forget the moment he received the first arrival in his baby box.

“When I saw the baby wrapped in a dirty towel, I just plunked myself down. I thought that we were prepared for it, but all our church staff were in floods of tears,” he said. It was March, 2010.

Rev Lee set up Korea’s first and only baby box in the wall of his church in October 2009, after someone had left a baby in front of his church; the child was almost dead of hypothermia.

“I just thought we needed a place where we could keep abandoned babies safe. I had no idea about the baby box then. Then I heard about a Czech hospital who had one, so I decided to make one for ourselves,” he said.

Rev Lee designed it with an oxygen supply, a heater and two doors -- one outside the church and one inside -- and a bell that rings to alert church staff  when the outside door is opened.

Since the first arrival, the church has received 231 babies. Of these, around 50 were taken back by their parents.

When a baby comes, the church first reports it to the police. Usually, the church keeps the baby for three days until a local health visitor  comes to take the baby to a hospital.  After medical checks the baby is then sent to an orphanage or, if needed, a facility for the disabled.

“Those babies are discriminated against from birth. I feel sorry for them,” said Rev Lee.

In fact those babies now face a legal form of discrimination.

A special adoption law, which came into effect in August 2012, stipulates that a baby cannot be adopted unless its birth has been registered by its parents. The well-intentioned amendment was aimed at curbing child trafficking and aiding adopted children’s rights to know and find their natural parents.

But it has had the unintended effect of causing a sizeable jump in the number of abandoned babies in the church’s box.

“In the past, we took in an average of two babies a month,” said Rev Lee. “Since August last year when the law changed, the number has increased to 15.”

He added that: “Most of the mothers are single teenagers and are afraid for their future when they register the babies under their name. Before the law, they could send their babies to adoption centers but now they can’t.”

For a fundamental solution, he maintains that the prevailing culture that shames unmarried mothers needs to be radically changed.

“In this society, where single mothers face discrimination and there is no social infrastructure to help them raise their own children, who would dare to register their baby? The law should be amended again to give practical help to them.”

However, the baby box does have its critics.

The UN Committee on the Rights of the Child warned that baby boxes that have been installed in Eastern Europe can infringe upon the rights of abandoned babies to access their parents.

Closer to home, the Ministry of Health and Welfare sent a warning letter in May, ordering the removal of the box saying it is illegal.

“Our criminal code says it is illegal for a linear ascendant to abandon an infant; it can be punished with up to two years imprisonment. Also, child welfare law prohibits neglect of babies and the baby box encourages those illegal activities,” an official at the ministry told ucanews.com, on condition of anonymity.

“How it is illegal to save a human life and to keep a baby in a safe place?” responded Rev Lee.  “That’s just an armchair argument. We will not stop operating it.”

Looking to the future, he said: “I always pray that there will be no more abandoned babies in this country and no more in our baby box. That’s all I want.”