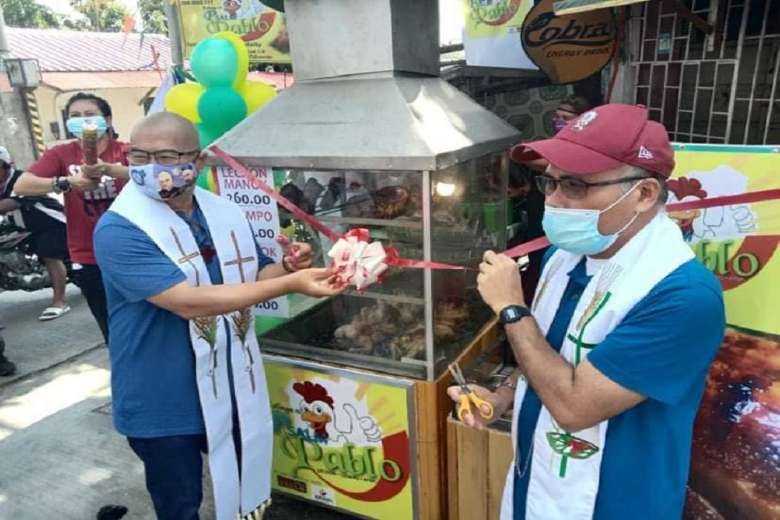 A Catholic priest in the Philippines has founded a business to help widows and orphans of President Rodrigo Duterte’s war on illegal drugs.

Society of the Divine Word Father Flavie Villanuava and a Manila parish have opened a grilled and roasted meat outlet in the capital called Psalm Pablo Manok at Liempo to provide jobs to those left behind by murdered victims of extrajudicial killings.

The outlet, which cooks mainly pork and chicken, opened for business on April 28 in Caloocan City where many of the killings have taken place over the last several years.

There was also a blessing attended by Father Villanueva and the family put in charge of the outlet.

The aim is to have one family per outlet. How many outlets there will be will depend on funds raised to get them open.

With the onslaught of the deadly coronavirus, these families are more vulnerable and in dire need

“Paghilom … seeks to help those who have been widowed and orphaned. Many have lost their breadwinners and have no source of income,” Father Villanueva told UCA News.

The family running the flagship outlet were required to undergo management training provided by a local entrepreneur who also supplied the meat.

“They were apprehensive as this will be the first time they have run a business,” Father Villanueva said.

“With the onslaught of the deadly coronavirus, these families are more vulnerable and in dire need ... They need this to survive,” Father Villanueva said.

“As they rise from being victims by earning a living for their family and loved ones through this endeavor, they too might like to offer and provide the community with a sumptuous and reasonable meal during this time of hunger.”

A Manila churchgoer sounded an optimistic note about the venture on social media.

Talking about the family placed in charge of the first outlet, he added: “Today, they arise from the ashes of their grief. Today, they take charge of their lives as single parents, as renewed and empowered women, and as entrepreneurs.”

Duterte’s drug war has claimed thousands of lives since he came to office in 2016. The number of killings dipped when the pandemic emerged last year but rights groups say they have recorded 186 killings during the first quarter this year, a 44 percent rise on the same period in 2020.