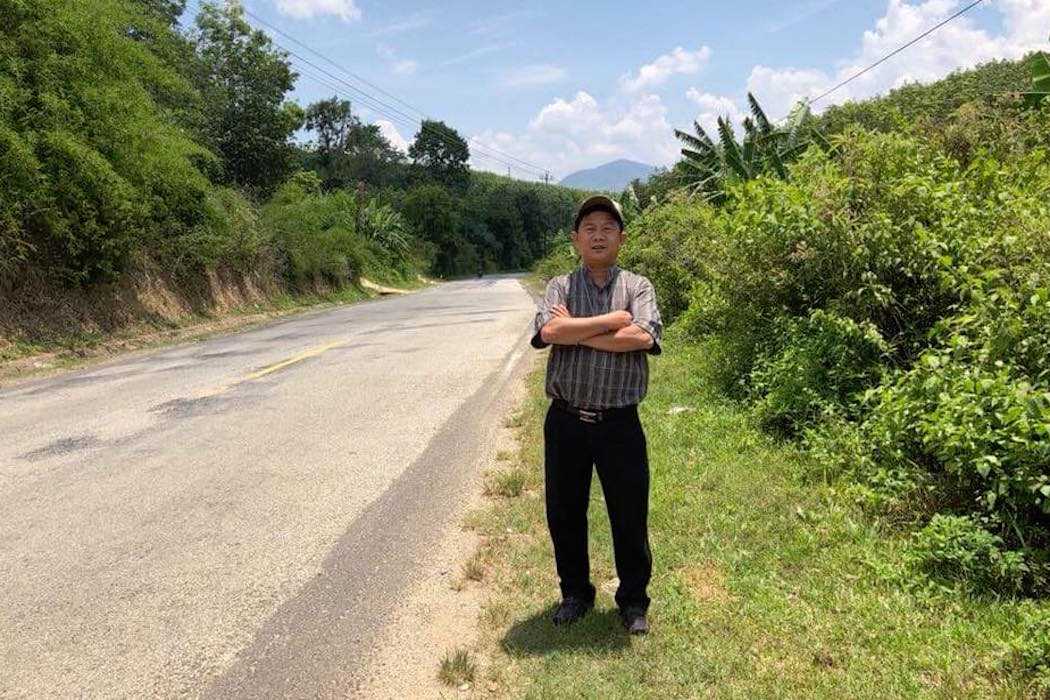 Father Joseph Dinh Huu Thoai on a road leading to Vietnam's border with Laos on May 14. (Photo supplied)

A Catholic female rights' activist and a priest have accused the Vietnamese government of breaking undertakings by blocking them from traveling abroad.

On May 16, Maria Do Thi Minh Hanh, president of the civil society Viet Labor Movement was stopped at Tan Son Nhat International Airport in Ho Chi Minh City, where she planned to take a flight to Germany to visit her mother.

Hanh, 33, said in a video posted on Facebook that officials at the airport told her that she was not allowed to leave the country for "national security" reasons.

She said she wrote on an official document that "I am clearly deprived of my rights to freedom of travel."

However, security officials said the document with the complaint was not accepted.

The activist said Vietnamese authorities had earlier promised German officials that they would allow her to go abroad. She subsequently was able to travel to neighboring Cambodia.

"The government tricked the German government and me when they allowed me to go to Cambodia, but have now barred me from travelling to Germany," she said.

She felt ashamed of the Vietnamese government's unacceptable treatment of her, Hanh said.

The recent bar was the fourth such against her in the past three years.

The union activist was arrested for "disrupting security" in 2010. She was sentenced to seven years in prison, but released in 2014.

This year, the U.S. Department of State recognized her as human rights heroine for her efforts to promote human and workers' rights in Vietnam.

On May 14, Redemptorist Father Joseph Dinh Huu Thoai was stopped by army officers at a land border with Laos when he intended to travel on to the United States to visit relatives and friends.

In an audio recording posted on Facebook, Father Thoai asked officers to explain why he was banned from leaving the country. Officials maintained that they were acting under orders from their superiors.

The priest said he had not violated any laws and was not the subject of any police ban order. Last November, he was able to travel out of Vietnam.

Father Thoai accused the government of taking away citizens' freedom of travel and violating the law by interfering with the activities of independent groups.

Father Thoai regularly speaks out against human rights violations and abuses of religious freedom. And he is active in supporting former South Vietnamese soldiers who have lived in extreme poverty since the Vietnam War ended in 1975.

In 2011, the priest was also barred from going to Cambodia.

Since June 2017, three Redemptorists have been barred from going abroad.