Priest pleads for pope to make the environment a top priority 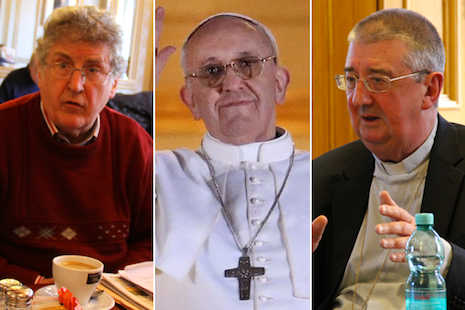 By John Adams and Sarah Parvini

As the shopkeepers in this capital city readied for St. Patrick’s Day under typically intermittent rainy skies, Father Sean McDonagh’s attention was on the new pope’s agenda.

The Columban priest, whose order has a long tradition of missionary work, has been an outspoken critic of Vatican policies. With Pope Francis’ honeymoon period underway he, like many, is waiting to see what issues will be at the center of the new papal agenda.

McDonagh, 69, believes Francis needs to go green, making environmentalism the No. 1 priority for the Catholic Church. And he’s willing to appeal to the sweet tooth to make his point.

“Do you like chocolate? You can almost be sure that in your lifetime...the cacao plant that produces chocolate, will be extinct. It's a rain forest plant and we are taking over the habitat.” said McDonagh, who sat down this weekend with a group of USC students who are studying international reporting on religion.

But McDonagh said he doubts Pope Francis will embrace environmentalism.

How big a role religion plays in environmental issues is unclear. A September 2010 Pew study found that only 6% of American churchgoers said their religious beliefs are the biggest influence on what they think about tougher environmental laws. Those surveyed said education and the media had more influence in how they formed their opinions.

While the Vatican has taken firm positions on social issues such as gay marriage and abortion, less attention is given to the church’s record on environmental work.  Under Pope Benedict XVI, solar panels were installed on the Holy See's ancient buildings and the Vatican made plans to off-set carbon emissions with a yet-to-be planted forest in Hungary.

Benedict’s predecessor, Pope John Paul II, also touched on environmental issues in his tenure, calling the  ecological crisis a “moral issue” in his 1989 World Day of Peace message.  Still, Dublin's Archbishop Diarmuid Martin, 67, said he believes Rome’s role lies not in environmental advocacy but in education.   “I believe the principle commitment of the church to social justice isn't in being a lobby organization,” he said, “but being a body which educates its members to be responsible in society.”    He spoke to USC students about the selection of the new pope at the library at his residence, where thousands of books lined the wall from floor to ceiling.   Martin said Catholics should apply the values they have learned at Mass and from understanding “creation is God’s creation” to build consensus on environmental issues and put their faith in action.  The idea of putting the message into motion reminded Martin of an old Irish saying:

Paddy Murphy went to Mass, and never missed a Sunday.

But Paddy Murphy went to hell, for what he did on Monday!

(Editor's note: since this article appeared on March 17, the pope has made a number of references in his public addresses to care for the environment.)