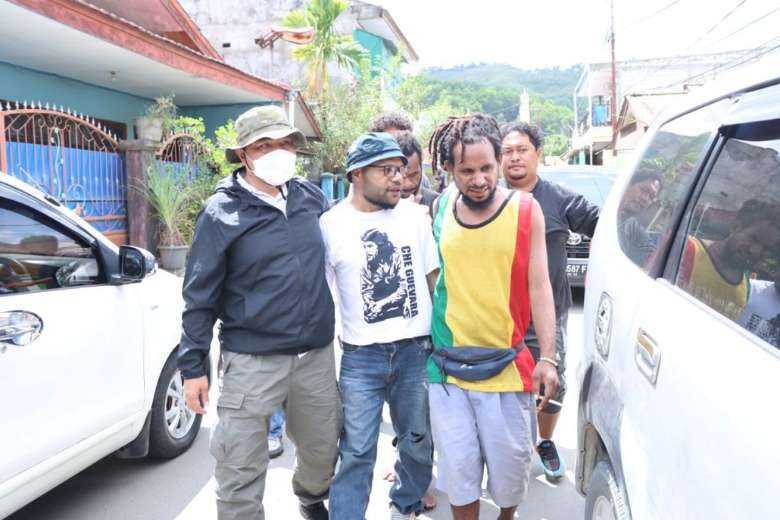 Jefry Wenda (white T-shirt), spokesman for the Papuan People’s Petition, is arrested by police on May 10. (Photo supplied)

A Catholic priest coordinating the Papua Peace Network has demanded the release of seven activists after they were arrested in the restive province for allegedly violating a law regulating electronic information and transactions.

Jefry Wenda, spokesman for the Papuan People’s Petition (PRP), and six others were arrested on May 10 at the secretariat office of the Papua chapter of the Commission for Missing Persons and Victims of Violence in provincial capital Jayapura.

Father John Bunay, coordinator of the Papua Peace Network, called on police to release Wenda and the other activists immediately.

“Police must not give legal sanctions to them because they only delivered the aspirations of many Papuan people. This is what police need to see clearly,” he told UCA News.

Jayapura police chief Senior Commissioner Gustav R. Urbinas said Wenda allegedly violated the Electronic Information and Transactions Law in relation to rallies held on May 10 to protest the government’s plan to break up the Papua region into six provinces.

“I saw it myself that young protesters only delivered orations. It seems that the space for democracy is shackled"

During the rallies, hundreds of Papuan people took to the streets. In Jayapura, a joint team comprising more than 1,800 police and military personnel fired water cannon and tear gas to disperse the protesters.

Father Bunay described the use of water cannon and tear gas as police arrogance. “I saw it myself that young protesters only delivered orations. It seems that the space for democracy is shackled,” he said, adding that rallies organized in other areas ran smoothly.

He also suggested that the government’s plan should be postponed. “It would be better if the government sits in a dialogue with the Papuan people first,” he said.

Urbinas said Wenda admitted he was responsible for the rallies in a flyer distributed to local people.

"We need to conduct an investigation into what he said in the flyer based on the law. We are also giving space to those arrested to get legal assistance,” he said.

Urbinas said Wenda could face up to six years in prison and a fine of up to 1 billion rupiah (about US$70,400) if found guilty of such a crime.

He said police confiscated a computer and a printer during the arrest, adding that the activists have been detained at the police headquarters since their arrest.