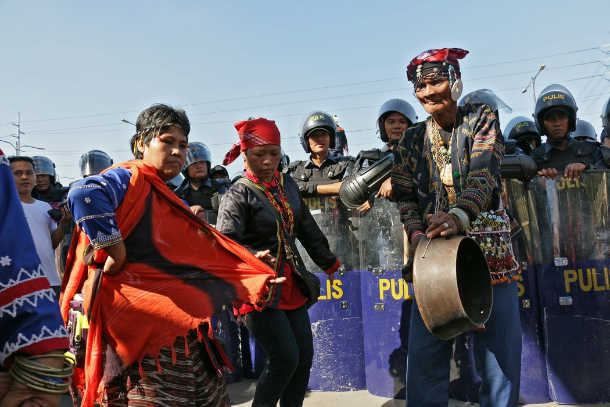 A Catholic priest has accused the Philippine military of mounting a smear campaign against him by falsely branding him as an active supporter of communist rebels.

Father Raymond Montero Ambray of Tandag Diocese said he came across Facebook posts on May 10 with his picture labeling him as a “priest-bringer of evil.”

He said he was being targeted for helping Lumads, indigenous people who rights groups say are victims of land grabbing by big business and scores of extrajudicial killings at the hands of the military and paramilitary groups.

The Lumads are the largest indigenous group in the Philippines. They live in Mindanao in the south and are often accused by the military of harboring and supporting communist insurgents.

Hundreds of indigenous people have been reported killed over the past few decades, prompting mass protests, including one in Makati City, Manila’s business district, in 2017 against the killing of tribal leaders that allegedly caused the displacement of thousands of people.

Father Ambray said his work with the Lumads included teaching them about their rights set out in the Indigenous Peoples Rights Act of 1997, which aims to protect their claim to ancestral domains or ethnic lands. The law says that no indigenous people can be relocated without their consent.

“The education I equip them with is so they can assert their rights… The help that I am offering them is small when compared to the enormous scale of their fight. Yet I am being accused of being an influencer or manipulator of them,” Father Ambray said in a social media post.

He also claimed his efforts were not political but theological in nature. “As a priest, I consider it my duty to bring about the integral salvation, bought by Christ on the Cross, among Lumads. It means leading them to their full potential as people or persons. It means dialoguing with them or learning from them.”

Father Ambray said he can think of no other suspect behind the social media posts calling him evil except the Philippine military.

“They are trying to besmirch my work as ideological and reduce my apostolate with the Lumads as a front of CPP-NPA [communist rebels]” he said.

The military could not be reached for comment on the priest’s claims.