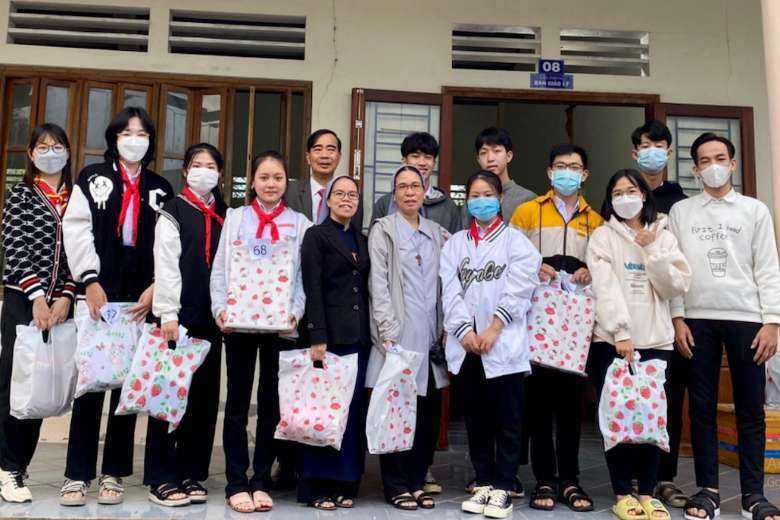 After the Mass on April 16, Lanh, head of Van Quat Dong Parish Council, put the candles in the God altar in his house.

He said that on a night in 1953 when their village was in full flood, his parents lit a blessed candle and recited the rosary in the attic. The flood receded and they and their crops were saved.

On the Lunar New Year evening in 1968, while his family gathered to pray for the new year in front of an altar with lit candles, a shell burst only meters away from their house but they were still safe.

“We prayed every night during the Covid-19 pandemic and we were not infected with the disease,” he said. “We have treated Easter candles like priceless treasures since our ancestors converted to Catholicism a long time ago.”

“We take grains with us when we work at sea because we believe that Jesus accompanies and brings peace to us. We avoid accidents at sea and always catch fish even in rough conditions”

Lanh said local people traditionally use Easter candles when they hold weddings, ceremonies of new houses, funerals and anniversaries of their relatives’ deaths and other major events.

Mary Dam Thi Phuong Thuy from Ha Loi Parish in Quang Tri province said local people who are mostly fishermen treasure grains of incense to bless their lives and livelihoods. Five grains of incense are inserted into the Paschal candle during the Easter Vigil, representing the five wounds in Jesus’ hands, feet and side.

Thuy, 65, said the five grains are annually taken out from the Easter candle on the Pentecost, the parish’s patron, and Catholics cast lots for the right to get the grains.

She said the grains are believed to hold spiritual power that protect fishermen, bless their work and cure children of their diseases.

“We take grains with us when we work at sea because we believe that Jesus accompanies and brings peace to us. We avoid accidents at sea and always catch fish even in rough conditions,” she said.

He said this year his family invited 15 people to have a special meal at his home. “We follow our ancestors’ ways to introduce Catholicism to other people,” he said.

Thong said people save money during Lent and buy food to provide for people in need on Easter Sunday.

Joseph Tran Quang Khung from St. Thomas Tran Van Thien Parish in Quang Binh province said that after Easter Sunday local Catholics traditionally clean and decorate the graves of their relatives at the parish cemetery as they believe that the “Risen Christ brings the spring and new life to people and the world.”

Khung, 81, said the tradition helps people to express gratitude to their ancestors who established and developed the parish.

He said the parish church was ruined and many people moved to other places to avoid wars but local Catholics remained faithful to the church for decades until a priest was assigned to the parish in 1991.

“It is religious traditions maintaining faith among us and now we have to transfer them to younger generations,” he said.

Hue Archdiocese serves 66,000 Catholics in 95 parishes out of a population of 2 million in the provinces of Quang Tri and Thua Thien Hue.