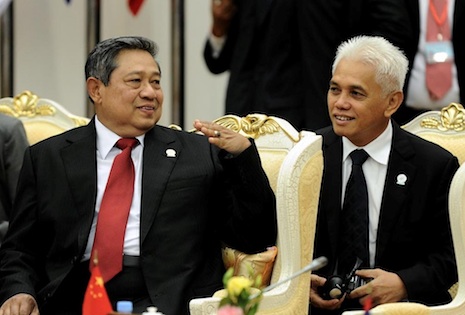 Rights activists say President Susilo Bambang Yudhoyono needs to back his words with solid action after a speech at an international forum yesterday in which he called for society to respect religious differences and minority groups.

President Yudhoyono was speaking at the 4th World Peace Forum in Bogor, West Java, an event attended by 200 international delegates. he  told the gathering that although the views of the religious majority must be accepted, “we must, however, not ignore the views of religious minority groups.

“Every party must promote a culture in which all differences should be addressed peacefully and must also prevent uncivilized actions such as violence [in dealing with differences],” he said.

"In democracy all parties must accept all differences. Rights and freedoms must not be used to harm religious values or symbols. For the sake of the nation, let us think of mutual interest.”

But rights activists challenged the president to act on what they say are merely hollow words.

“What he says doesn’t portray the reality. The legal process regarding cases involving religious violence doesn’t work well. Worse, it criminalizes those who are the victims,” Choirul Anam from the Human Rights Working Group told ucanews.com.

He cited a case involving people from the minority Shia Muslim community in East Java.  Most people in Indonesia are Sunni Muslims.

In August, two members of the community were killed and 10 others injured in anti-Shia violence in Sampang district of Madura. The community’s village was also attacked by a mob which set dozens of homes ablaze, forcing hundreds of people to flee.

More than 100 of members of the community are still staying at a refuge shelter.

“They are victims of the state’s failure to respect differences,” Anam said.