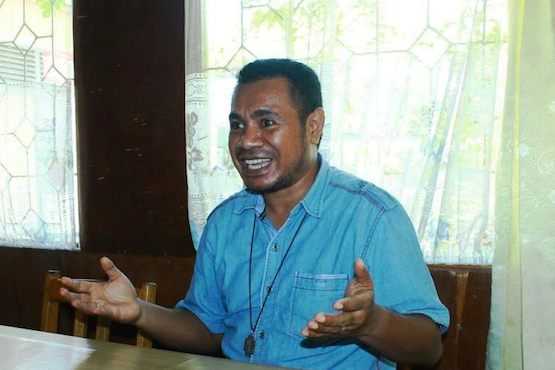 Father Anselmus Amo says tribal people are being intimidated by the military. (Photo by Eman Riberu)

A priest in Merauke Archdiocese in Papua has appealed to Indonesian President Joko Widodo, urging him to halt the destruction of pristine forests by a palm plantation corporation.

The forest in Papua’s Muting area, about 200 kilometers from district capital Merauke, is being snatched from tribal people who depend on it for their very survival, Father Anselmus Amo of the Missionaries of the Sacred Heart of Jesus congregation, told ucanews.com.

Leaders of the of Mahuze Besar tribe say they are being intimidated by the military to hand their land over to palm company — PT Agroprima Cipta Persada.

The priest who heads the diocesan justice and peace commission said he has petitioned the president because he is the last hope for the tribal people.

"The issue has caused widespread anxiety and tension between people, the company, local government and law enforcers," said Father Amo.

Father Amo said he has also petitioned the National Commission on Human Rights.

"We hope the commission can address the issue at national level," he said.

Klemens Mahuze, a local tribal person said people are opposed to palm corporations because for them the forest is a sacred place and a source of livelihood.

"We don’t want [greedy] people touching our forest," he said.

Sulaeman Hamzah, a parliamentarian and a member of Indonesia’s agriculture commission, said he would take up the case because the government has limited the availability of land for the palm industry in the area,

"We will see the impact, and the validity of the company’s license," he said.