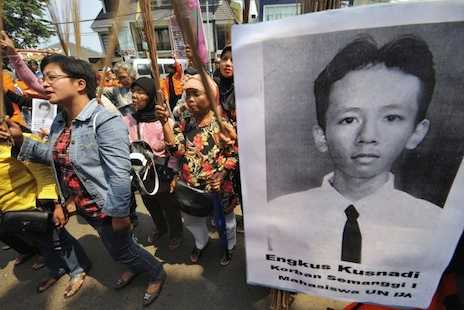 The survey found that only 0.5 percent of 200 respondents — comprising activists, academics, community leaders, journalists, lawyers and researchers — from 20 provinces, were convinced that if Prabowo was elected he would be committed to the protection of human rights.

An equal number of respondents also doubted Aburizal’s commitment to human rights. He, as owner of oil and gas company PT Lapindo Brantas, was deemed responsible for the Lapindo mudflow in Sidoarjo, East Java, which displaced thousands of people in 2006. National Commission on Human Rights (Komnas HAM) announced the Lapindo mudflow was a human rights violation and Lapindo Brantas was responsible for the man-made disaster.

On the other extreme, the survey found that popular Jakarta Governor Joko “Jokowi” Widodo was considered to be committed to protecting the basic rights of the people.

Jokowi got the nod from 39 percent of respondents, followed by former Constitutional Court justice chief Mahfud MD with 20 percent.

The study cited Prabowo’s dark past as the main reason behind the respondents’ poor assessment of him.

“It is obvious that certain segments of society remember his record,” Ismail Hasani, a Setara researcher said.

Setara Institute chairman Hendardi, however, said that as more people forget — or are not aware of — Prabowo’s past deeds, it was the responsibility of rights group to educate them.

“The majority of the public, especially young voters, lack knowledge. It is our job to evaluate and publish our findings on how committed these figures are to protecting and upholding the rights of the people,” Hendardi said Monday.

Prabowo will always be associated with the 1998 May riots in Jakarta, which precipitated the end of former Soeharto’s authoritarian regime.