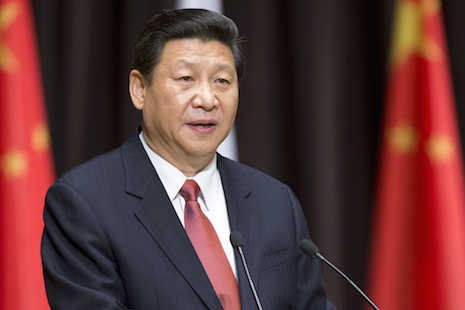 Chinese President Xi Jinping is pictured in Moscow in 2013 (Photo by Kaliva / Shutterstock.com)

President Xi Jinping yesterday urged China’s religions to shun foreign influence amid concerns over Islamic extremism and the role of The Vatican among the country’s growing Church community.

Xi said that the government must value religious leaders and in turn direct them to better serve China’s development and unification, a reference to restive Xinjiang and Tibet.

“Active efforts should be made to incorporate religions in socialist society,” Xi said in his speech to the United Front Work Department, an agency tasked with aligning groups with the aims of the Communist Party.

“We must manage religious affairs in accordance with the law and adhere to the principle of independence to run religious groups on our own accord,” he added.

Authorities reportedly confiscated passports near the Kazakh border in Xinjiang earlier this month as the state cracks down on Muslims travelling to and from the region.

Beijing has cited the influx of Chinese fighters joining ISIS in Iraq and Syria, and the presence of Xinjiang separatist militants in northern Pakistan as a justification for restrictions.

State media recently announced plans to enlarge the only Muslim training center in Xinjiang in a bid to seize firmer control of Islamic teachers and their interpretation of the Qu’ran.

“[Chinese policy] has included extensive curbs on Islam through state administration of religion and engineering a diminished role for the Uyghur language in education,” the US-based Uyghur Human Rights Project said in a report published yesterday.

Similarly, in Tibet where Buddhist monasteries have traditionally led cyclical uprisings against Chinese rule, the government has introduced an advanced education course to develop patriotic lamas and monks.

The student handbook notes the first task is to cultivate and build a reserve of Tibetan Buddhists who are “politically reliable, educated and venerable”.

Last month, the Communist Party chief in Tibet announced new classes for monks that would teach Chinese law and a program to supply radios and newspapers to remote monasteries in an apparent bid to more widely diffuse China’s shackled media.

The government has engaged with The Vatican in recent months as talks continue over an enduring impasse on bishop appointments, but Beijing has given no sign it may be willing to cede any meaningful control of the process to the Holy See.

Meanwhile, Zhejiang has continued a crackdown on Christianity that has seen at least 470 crosses removed and more than 35 churches destroyed since the end of 2013.

During his tenure, Xi has regularly distinguished between “foreign religions” – particularly Christianity and Islam – and homegrown faiths by actively endorsing Buddhism, Daoism and Confucianism.

China’s state media has published frequent Confucian references made by Xi, a series that was compiled and published as a book in March.

“The most dangerous situation is when apparently everything seems fine, but there breeds hidden danger,” reads one quote, among the most frequently cited by China’s president. “If one only sits and watches, the situation would worsen and there would be no turning back.”