The confidence of the majority of Indonesians in President Joko Widodo has eroded significantly, with many even accusing him of muzzling democracy and civil liberties.

Contrary to his first five years, where the vast majority hailed him as a champion of democracy and freedom, the first year of his second tenure proved to be deeply unsatisfactory. It’s certainly a rocky year for Widodo, whom people called the president of wong cilik or little ones, on his way to transforming the Indonesian economy and politics, exacerbated by the coronavirus pandemic.

It’s a shock too for his Indonesian Democratic Party of Struggle, which together with its allies controls most seats in parliament.

On Oct. 20, the public was supposed to be cheering one year of Widodo’s presidency with his vice president Ma’ruf Amin, former chairman of the Indonesian Ulema Council. However, it turned out to be a gloomy day marred by violent protests — partly driven by disappointment over the job creation law passed on Oct. 5 and partly due to Widodo’s failure to address crucial issues related to democracy and freedom of expression, including past rights abuses and violence in Papua.

Diminished public confidence in Widodo and his administration was confirmed by recent surveys. The result of a poll conducted by Kompas, Indonesia’s largest daily, showed that over 52 percent of respondents were unhappy with the Widodo-Amin partnership's performance in key sectors, such as the economy, politics and security, law enforcement and social welfare. A survey by Indonesia Political Review found that more than 51 percent of Indonesians were unhappy with their performance.

The same survey also measured public reaction to the performance of his ministers, which was not much different from the president’s. Interestingly, Defence Minister Prabowo Subianto, Widodo’s arch-rival during the presidential race, had the best performance among cabinet members but certainly cannot improve the president’s scorecard.

While the economic failure was much dictated by the pandemic, the most pressing concern under Widodo’s direct control was the shrinking space for freedom of opinion.

Survey results were correlated with past incidents, such as the arrest of activists who were critical of government policies. The passage of the job creation law, without transparency and seen more as a product of a pro-capitalist administration, added fuel to criticism of the government.

Earlier, Busyro Muqoddas, former chairman of the anti-corruption agency, described the situation of Widodo's second term "a new form of authoritarianism” indicated, for example, by the placement of many police and military officials in government agencies.

Even the current administration was accused of intervening in higher learning institutions by prohibiting students from protesting against the government. It’s ironic because throughout Indonesian history students have always been the frontliners in opposing unjust policies, even against the authoritarian regime of Suharto. 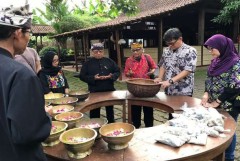 Other forms of attenuation against critical voices under the current administration include cyberterror in the form of hacking social media accounts, arbitrary use of the electronic transaction law, and violence against activists and journalists. These patterns caused a decline in the quality of democracy in Indonesia.

Usman Hamid, executive director of Amnesty International Indonesia, told Kompas TV on Oct. 28 that his team recorded 241 cases charged under the internet law during Widodo’s first year — including 82 defamatory cases against the president — surpassing the 233 accumulated cases during his first five years.

The arrest of several top officials of Save Indonesia Coalition who were critical of the government contributed to the negative reaction to the government’s performance.

During its launch in August, Syamsuddin explained the coalition’s mission as “a moral movement aiming to uphold truth and social justice” in a society where the role of opposition has lost its meaning.

The coalition, among others, demanded the government seriously tackle the Covid-19 pandemic and pay attention to domestic and informal workers rather than large and foreign entrepreneurs.

It called on the government to end discriminatory law enforcement, criminalization of political opponents and the practices of oligarchy, kleptocracy, political dynasty and power abuse. It also urged the administration to stop the stigmatization of religious groups with issues of intolerance, radicalism and extremism.

Since then, its members have continued to be critical of Widodo’s government, claiming it was undemocratic. On the other hand, government supporters considered them as troublemakers taking advantage of the pandemic and anti-job creation law protests for political gain towards the 2024 presidential election. The police arrested eight coalition officials for subversion and they are now in police custody.

Rights groups have warned that the government’s unscrupulous actions against dissent threatens Indonesian democracy. The Commission for Missing Persons and Victims of Violence, or Kontras, in its report last week said that recent developments could push Indonesia towards "democratic recession" indicated by violations, restrictions or attacks against civil freedom, the government’s inability to settle gross human rights violations, the involvement of police and soldiers in civilian affairs, and the lack of public participation in legislation.

These are the tip of the iceberg and if Widodo as the commander-in-chief does not change his leadership style, it is not impossible that the rest of his presidency will bring huge devastation.

Widodo has to realize that democracy, in order to function well, allows dissenting voices in society. Since opposition parties are far too small in comparison to the pro-government alliance, civil society groups critical of the government’s policies should not be treated as troublemakers but as partners in democracy.

With that in mind, Widodo can fix the problems and regain public trust as the champion of democracy and civil liberty. Less suppression means a healthier society.