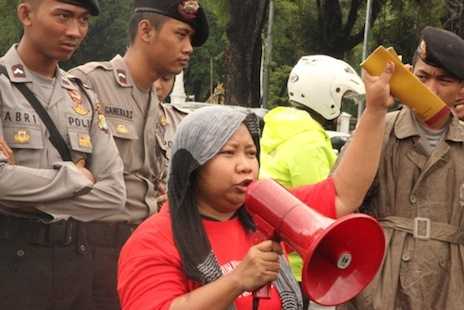 Data from Migrant Care shows that 1,249 Indonesian migrant workers have died so far this year – up from 1,012 last year – due to violence committed by their employers, depression, workplace accidents, illness and shootings. The largest number of migrants died in Malaysia (910), followed by Saudi Arabia (232) and Hong Kong (23).

"Based on the data, we estimate that three to four migrant workers die each day," said Anis Hidayah, executive director of Migrant Care, during the protest opposite the Presidential Palace in Jakarta on Wednesday.

Hidayah highlighted the case of Esther Ria, a 32-year-old domestic servant from West Kalimantan, who died in September after being subjected to torture at the hands of her employer in Malaysia.

"A number of bruises and wounds caused by cigarette burns were found on her body,” said Hidayah.

The country’s migrant workers face numerous other hardships. Most common gievance is that employers fail to pay their salaries, while thousands of workers workers claim to have been victims of sexual harassment and violence.

Wahyu Susilo, a policy analyst at Migrant Care, said that rights abuses committed against migrant workers continued to take place because the government has not taken concrete steps to address key issues.

In April 2012, the Indonesian government ratified the United Nations International Convention on the Protection of the Rights of All Migrant Workers and Members of Their Families.

“But there’s been no significant measures taken to ensure migrant workers’ rights, either through policy or diplomacy,” said Susilo.

The convention was only ratified to improve Indonesia’s image in the international community, he added.

However, Reyna Usman, director general of the manpower placement division at Indonesia’s Manpower and Transmigration Ministry, stressed that government was constantly working to minimize mistreatment of migrant workers.

The government prepares migrant workers through educational programs and courses before they travel abroad and encourages them not to “remain silent” when they face harassment at work, she said.

As of October this year, there were six million Indonesians working abroad, based on data compiled by the Manpower Ministry.

"While we strive to give all the assistance we can to them, we will also try to improve ministerial procedures", added Usman.